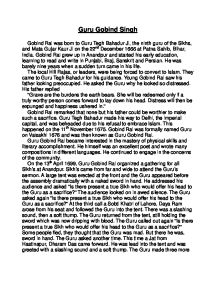 Guru Gobind Singh Gobind Rai was born to Guru Tegh Bahadur Ji, the ninth guru of the Sikhs, and Mata Gujar Kaur Ji on the 22nd December 1666 at Patna Sahib, Bihar, India. Gobind Rai grew up in Anandpur and started his early education, learning to read and write in Punjabi, Braj, Sanskrit and Persian. He was barely nine years when a sudden turn came in his life. The local Hill Rajas, or leaders, were being forced to convert to Islam. They came to Guru Tegh Bahadur for his guidance. Young Gobind Rai saw his father looking preoccupied. He asked the Guru why he looked so distressed. His father replied "Grave are the burdens the earth bears. She will be redeemed only if a truly worthy person comes forward to lay down his head. ...read more.

All who have taken Amrit, the sweetened water, are baptised and are required to wear the five symbols of the Khalsa, which are -Kesh, uncut hair or beard -Kanga, a comb in the kesh to keep it tidy -Kara, a steel braclet -Kaccha, short breeches -Kirpan, a sword All Amrit-Dharis (Baptised Sikh's) are to uphold the Rahit (Sikh code of ethics and rituals) and to help the community. After initiation the new Khalsa members adopt the last name of 'Singh' (lion) if a man, and 'Kaur' (princess) if a woman. They must only follow Sikhism, worship every day and follow the Guru's teachings. After the Panj Piare had taken Amrit the Guru himself received initiatory rite from the Panj Piare. Guru Gobind Rai had his name changed to Guru Gobind Singh. The Khalsa members are described as saint-soldiers, this is because they lead a peaceful life but are ready to fight against injustice. ...read more.