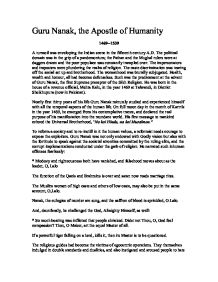 Guru Nanak, the Apostle of Humanity 1469--1539 A turmoil was enveloping the Indian scene in the fifteenth century A.D. The political domain was in the grip of a pandemonium; the Pathan and the Mughal rulers were at daggers drawn and the poor populace was constantly trampled over. The impersonators and imposters were plundering the realm of religion. The caste discrimination was tearing off the social set up and brotherhood. The womanhood was brutally subjugated. Health, wealth and honour, all had become defenseless. Such was the predicament at the advent of Guru Nanak, the first Supreme preceptor of the Sikh Religion. He was born in the house of a revenue official, Mehta Kalu, in the year 1469 at Talwandi, in District Sheikhupura (now in Pakistan). Nearly first thirty years of his life Guru Nanak minutely studied and experienced himself with all the temporal aspects of the human life. On full moon day in the month of Kartrik in the year 1469, he emerged from his contemplative trance, and declared the real purpose of his manifestation into the mundane world. His first message to mankind echoed the Universal Brotherhood, "Na koi Hindu, na koi Musalman." To reform a society and to re-instill in it the human values, a reformist needs courage to expose the exploiters. ...read more.

The Caste discrimination was another derogatory facet of religious convention prevalent at the time. The touch of a low caste was considered as an act of pollution by the arrogant people from high ranks. Let alone talking, even the sight of a pariah was considered a bad omen. With the message of, "In the next world, caste and power count not...." Guru Nanak forcefully condemned such practices. * What is in the power of caste?......................... High caste pride is like poison by holding in hands and eating which, the man dies. * That alone is man's caste and that his glory, as are the deeds, which he does. * Preposterous is caste and vain the glory. The Lord alone gives shade to all the being. * No one should be proud of his caste................... O Stupid fool, be thou not proud of thy caste. From this pride, many sins well up. In the contemporary life, going through the Matrimonial Columns one frequently comes across, "Wanted a Jat Sikh... a Ramgarhria Sikh... or a Khatri Sikh." How can they call them Sikhs? Such protagonists of caste aberration were strongly admonished by the Supreme Guru: * .... ask not the mortals caste and birth, so find thou the True Home. ...read more.

If thou preservest thy home and tastest not the sin, then thou shalt be the beloved of thy spouse, But Guru Nanak, amidst all the political and social upheaval, could not endure the suffering meted out to woman. His conception of womanhood was very honourable and sophisticated. He denounced the male domineering and chauvinistic attitude, and reminded people of their whole existence through the divinity of womanhood: * Within a woman, the man is conceived and from a woman he is born. With a woman he is betrothed and married. With a woman, man contracts friendship and with a woman the system of propagation keeps on going. When one's wife dies, another lady is sought for. It is through a woman that man restrains his passion. Why call her bad, from whom are born Kings? From a woman, a woman is born. Without a woman, there can be none. Guru Nanak was the voice of the oppressed and meek, and by hearing his Word (Bani) people were endowed with solace and expectation. The Bani equally discharged the strong warning shots to the mammons, tyrants and persecutors. Wherever the celestial mission of Guru Nanak prevailed the people proclaimed without any discrimination: "With the manifestation of Guru Nanak, The Earthly wilderness and Temporal mist were lifted, And the celestial rays enlightened through the mankind." (Bhai Gurdas.) *Gurbani Quotations from the author's book, "Thus Sayeth Gurbani." ...read more.