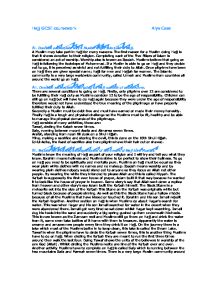 Hajj GCSE coursework Alys Case Ai. Describe and explain why a Muslim might take part in Hajj. A Muslim may take part in Hajj for many reasons. The first reason for a Muslim doing Hajj is that it shows devotion to their religion. Completing each of the Five Pillars of Islam is considered an act of worship. Worship also is known as Ibadah. Muslims believe that going on Hajj is following the footsteps of Muhammad. If a Muslim is able to go on Hajj and they decide not to go, it is perceived as sinful and not fulfilling their duty to Allah. Once pilgrims have been on Hajj they are given special name; Hajji for men and Hajjah for women. The Islamic community is a very large worldwide community, called Umrah and Muslims from countries all around the world go on Hajj. Aii. Describe and explain what going on Hajj consists of and involves. There are several conditions to going on Hajj. Firstly, only pilgrims over 12 are considered to be fulfilling their Hajj duty as Muslims consider 12 to be the age of responsibility. Children can still go on Hajj but will have to do Hajj again because they were under the age of responsibility therefore would not have understood the true meaning of the pilgrimage or have properly fulfilled their duty to Allah. ...read more.

Tawaf is when the pilgrims have to circle the Ka'bah seven times, this is another thing Muslims have to do on hajj. When circling the Ka'bah they are meant to run the first three times around then walk the last four. Doing Tawaf shows the unity of the believers in worship of the one God [Allah]. Whilst circling the Muslims recite one line of the Ka'bah over and over. Another activity Muslims have to complete on Hajj is called Saiy which is running between the two mountains Safa and Marwah seven times. There is a very large Muslim community around all around the world and this community is called Ummah. Arafat lies about twenty-four kilometres east of Makkah in hilly terrain. Adam and Eve were the first humans on earth and also the first prophets of Allah. They were disobedient in Al Jammah. They were separated for 100 years for their disobedience. They both repented and prayed for genuine forgiveness and were reunited with god on the 8th Dhul Hijjah on the Mount of Mercy which rises above the plain of Arafat. The name Arafat means 'recognition'. Allah decided to test Ibrahim by asking him to sacrifice his son Ismail. ...read more.

Ihram will tell them be more great full for things in life and how much god has given you. Tawaf would make you think about who you are, and make you feel better. You feel at home and united with millions of your culture. You will realise how many there are of you, you will feel welcome and relief that your not alone in the world. They may have come with one brother but now they have millions. They will look better and fitter from all the walking. Performing sai'y you will be reminded of the Islamic history and feel you are a part of history. While at Arafat you are asking Allah for forgiveness for your bad sins you have committed, this will take a big weight off your shoulder to finally express your sins. In Mina once you are forgiven, you would have changed your life for forever because you know you will never commit your bad sins again. You would have thrown all your evil sins away. You will have a better attitude towards life and life style; you will treat everyday as a fresh day, a day given to you from god. A Muslim has now changed; they have fresh sins and are a new better person. C. "A true pilgrimage is really a journey within" Do you agree with this statement? ...read more.