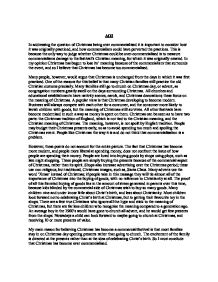 Has Christmas become over commercialised

The meaning, however, is not spoilt by English tradition. People may budget their Christmas presents early, so as to avoid spending too much and spoiling the Christmas event. People like Christmas the way it is and do not think that commercialisation is a problem. However, these points do not account for the entire picture. The fact that Christmas has become more modern, and people more liberal at spending money, does not confront the issue of how people are spending their money. People are lured into buying goods by shops using ploys, such as late night shopping. These people are simply buying the presents because of the commercial aspect of Christmas, rather than its spirit. ...read more.

There are a few true Christians who ignore all the hype and stick to the meaning of Christmas, but there are far less children who recognise the meaning compared to a generation ago. An average boy in the 1960's would have gone to church all advent, and he would get few presents from the shops. Nowadays a child can look forward to maybe going to church at Christmas, and receiving 10 or more presents of value. My main reason for believing Christmas has become a commercial festival is that most families stay in on Christmas day opening presents rather than going to church. The excitement of the family is directed at the presents rather than at the idea of celebrating Christ's birth. So I must conclude that Christmas has become over commercialised. ...read more.