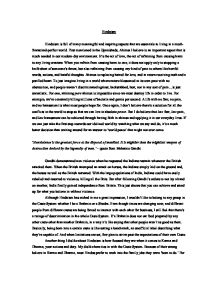 Hinduism Hinduism is full of many meaningful and inspiring aspects that are essentials to living in a much-fantasized-perfect world. First mentioned in the Upanishads, Ahimsa I believe is an important aspect that is much needed in our modern-day environment. It's the act of love, the act of refraining from causing harm to any living creature. When you refrain from causing harm to one, it does not apply only to stopping a knife short of someone's throat, but also refraining from causing any kind of pain to others like hurtful words, actions, and hateful thoughts. Ahimsa is replacing hatred for love, and in return receiving truth and a purified heart. To just imagine living in a world where nature blossomed at its own pace with no obstruction, and people weren't discriminated against, backstabbed, hurt, nor in any sort of pain...is just unrealistic. For one, attaining pure ahimsa is impossible since we must destroy life in order to live. For example, we're constantly killing millions of bacteria and germs per second. ...read more.

But after following Gandhi's orders to not lay a hand on another, India finally gained independence from Britain. This just shows that you can achieve and stand up for what you believe in without violence. Although Hinduism has etched in me a great impression, I wouldn't like to belong to any group in the Caste System whether I be a Brahmin or a Shudra. Even though times are changing now, and different people from different castes are being forced to interact with each other for business, I still feel that there's a twinge of descrimination in the whole Caste System. If a Brahmin does not eat food prepared by any other caste other than another Brahmin, in a way it's like saying that other people aren't as good as them. Basically, being born into a certain caste is like setting a benchmark, an unofficial label describing what they're capable of. And when limitations are set, few plan to strive past the expectations of their own Caste. ...read more.

And when Prince Rama defeated the demon Ravana during the battle. These stories and many others are repetitively expressed during festivals and woship. During the festival Dassehra, a wooden statue of Ravana 30 meters high is burnt representing that good always triumphs over evil. Aside from the festivals and stories that Hindus remember and celebrate, most Hindus worship in mandirs with singing, Havan, sacrifice, and other traditional procedures. In addition to worshipping in mandirs, many also visit holy rivers on pilgrimages to become closer to god. They also practice different paths of meditation in hope that they'll eventually reach moksha. Hindus also aim to complete the four ashramas so that they'll become one with Brahman where they are no long affected by materialistic items and are ready to give up anything. Through learning about Hinduism, I've gained a much better understanding of certain aspects of Hinduism like festivals, stories, Holy books, traditions, systems and concepts and even though I don't think I'll convert any time soon, I believe Hinduism like all religions have very insightful concepts like ahimsa that the world should hear about and try to apply in their everyday lives. ...read more.