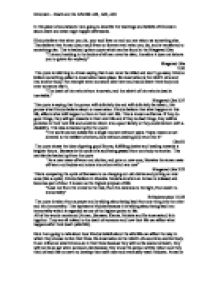 In this piece of coursework I am going to describe the teachings and beliefs of Hinduism about death and what might happen afterwards. Hindus believe that when you die, your soul lives on and you are reborn as something else. They believe that Atman (your soul) lives on forever even when you die, and is transferred to something else. This is backed up by a quote which can be found in the Bhagavad Gita. "This soul residing in the bodies of all can never be slain; therefore it does not behove you to grieve for anybody" Bhagavad Gita 2:30 The quote is referring to Atman saying that it can never be killed and won't go away. Hindus believe something called re-incarnation takes place. Re-incarnation is the rebirth of a soul into another body. For example when someone dies there soul would leave there body and enter someone else's. "The death of him who is born is certain; and the rebirth of him who is dead is inevitable." Bhagavad Gita 2:27 This quote is saying that the person will definitely die and will definitely be reborn; this proves what Hindus believe about re-incarnation. ...read more.

All of the words mentioned (Atman, Samsara, Karma, Moksha and Re-incarnation) link together. They are all related to the death of someone and how their life can affect what happens after their death (afterlife). Here I am going to talk about how Hindus beliefs about the afterlife can affect the way in which they choose to live their lives. Re-incarnation is the rebirth of a soul into another body. It can influence what Hindus do in their lives because they will not be scared of death, they will not be as sad when someone dies because they know the person will be reborn and they think of each life on earth to develop them self more and eventually reach Moksha. Atman is an enternal soul which lives on forever, even when the person dies. Atman can affect the way Hindus live their lives because at a funeral they do not see the body as important and therefore get rid of it, they focus on the soul moving on to another body, and being reborn. Karma affects what you are reborn as, if you do good things you get reborn with rewards, if you do bad things you are reborn with punishments. ...read more.

They think of their next life as important. They would want to enjoy their life, but enjoy it by doing good things so that they can get good karma and be reborn with rewards in their next life. I think that an Atheist would agree with the statement because they do not believe in Re-incarnation, they don't believe in God. They feel people should be able to do whatever they want without any consequences and not be influenced by religion. Christians would partially agree and disagree because they believe in heaven and h**l and want to go to heaven after their death. However they do not believe that there is an afterlife and they don't believe you will be reborn. Personally I would agree with the statement because I don't believe in re-incarnation. I think people should enjoy life without worrying what might happen next. However I agree with Hindus to an extent because I still don't think people should be able to commit crimes and not get punished for them. They should just be punished in the same life not the next as I feel it is a fresh start. Hinduism - Death and the Afterlife A01, A02, A03 ...read more.