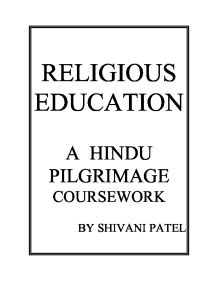 RELIGIOUS EDUCATION A HINDU PILGRIMAGE COURSEWORK BY SHIVANI PATEL INTRODUCTION My RE GCSE Hinduism coursework is about Pilgrimage. A pilgrimage is when Hindus go to a holy place to experience some spiritual healing. A pilgrim has to endure hardship and mental strength. A pilgrimage site could be a shrine, temple, holy city or even a river. Pilgrimages could be where a miraculous event has occurred, and usually there is a temple there as well. Although pilgrimages are not a written rule for Hindus to follow, many Hindus feel obliged to go on a pilgrimage at least once. There are many natural holy sites, such as the River Ganges, and the Himalayas. Here, there are temples of worship to be found. Along the Ganges, there is the city of Benares, also known as Varanasi. I shall be writing about this particular pilgrimage further in my course work. The Himalayas, which is seen as one of the closest states of being near to the gods, are also popular. Mount Kailasha is a strenuous journey, for the sake of the god Shiva. Another magnificent city is that of Puri. ...read more.

The ritual of Shraddha, is when Hindus go on a pilgrimage where they offer food, like special b***s of cooked rice called pinda. This ceremony is carried out for the spirit of a decease loved one, usually the father. Sometimes, people do things that are against their religion. Hindus go on a pilgrimage to make amends or atone for the sin, if this is the case. These pilgrims would either endure pain, give charity of most commonly, perform a puja to ask for forgiveness. Sometimes the 'shadow-gift' ritual is performed, in which the Hindu must look at his reflection and repent his sins. As there is a lot of diseases around, and there aren't always means to treat it, faith-healing is also a good reason why pilgrims go on such harsh journeys. In general, Hindus aim to go on a pilgrimage for other, less specific reasons. For example, some pilgrims may just want to please the gods and receive good luck in return. This could mean spending a lot of time praying to this god, and performing pujas or other religious rituals. This is thought to please the gods, and they will show their appreciation. ...read more.

The peace of mind provided from knowing that they have fulfilled a duty is very satisfactory, and it is all a matter of sorting out priorities, as the gods can appreciate the act that the pilgrim has sacrificed an awful lot just for them. On a light-hearted note, the pilgrimage introduces a whole new way of life. It shows the barriers of the caste system broken down, and that they are all equal in the gods' minds. Hindus can meet a range of people, some just like them, and others that are totally different. I disagree with this statement, I personally believe that pilgrimage is not a waste of time, and that it would be a wonderful experience to have. However, I can understand that not everyone would want to go on a pilgrimage and I strongly believe that no one should be forced into going on a pilgrimage. This is as the pilgrimage should be a journey that you have chosen to do not because you have to. I believe that you must endure physical as well as mental strength to successfully complete a pilgrimage. This is a test of devotion to the god that you love and worship. I think the sacrifices made to your god should prove gain good karma. 2 ...read more.