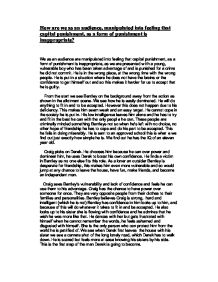 How are we as an audience, manipulated into feeling that capital punishment, as a form of punishment is inappropriate?

How are we as an audience, manipulated into feeling that capital punishment, as a form of punishment is inappropriate? We as an audience are manipulated into feeling that capital punishment, as a form of punishment is inappropriate, as we are presented with a young, vulnerable boy who has been taken advantage of and is punished for a crime he did not commit. He is in the wrong place, at the wrong time with the wrong people. He is put in a situation where he does not have the brains or the confidence to get himself out and so this makes it harder for us to accept that he is guilty. From the start we see Bentley on the background away from the action as shown in the allotment scene. We see how he is easily dominated. He will do anything to fit in and to be accepted. However this does not happen due to his deficiency. This makes him seem weak and an easy target. He cannot cope in the society he is put in. His low intelligence leaves him alone and he has to try and fit in the best he can with the only people he can. ...read more.

This is the first step of the man Derek is going to become. We see in the butchers the big, hard, gangster wannabe get the coupons mixed up this shows us how he is no different from Bentley he has the same lack of intelligence but gets away with this because he has the confidence to make up for it. During the railway scene Craig appears to run into a moving train it looks very believable even the audience falling for it as well as Bentley. Now our thoughts and opinions about Craig being dodgy are confirmed we now see Craig for who he really is a scheming, cheating, deceitful, child. On the roof Derek says, "Let him have it," meaning let the police officer have the gun, but in court this was taken out of perspective implying that Derek meant for Craig to shoot at the officer. Derek's words were twisted to make him look guilty and that the shooting was his entire fault. During the court scene the judge confuses him and intimidates him. He does not sympathise and is harsh. He appears to have already made up his mind that Bentley is guilty and no matter what evidence is given it would not sway him. ...read more.

The director shows us how much Derek's case has affected the people of Britain. We see the bath full of letters, we also see protests and campaigns to set Derek free and spare his life. We see his father fighting so hard to set his son free. We now cannot understand if so many people are against his death why should it go ahead. Why should a young boys life be taken away for saying for small words to protect someone's life rather than take it. We as an audience are made to feel that capital punishment, as a form of punishment is wrong as we see a helpless and defenceless boy and his families worlds turned around. Not only is he wrongly accused in the first place, mercy is not given and we see Bentley hung. He was innocent, but because there was nothing to prove it a young boys life was wretchedly snatched away! I think that the director was strongly against capitol punishment that is why he presents us with a young helpless boy and his struggles just to have friends. He shows us Derek's side of his ordeal and his struggles. He does a really good job as by the end we all feel strongly against capitol punishment as we now know sometimes the wrong person is punished, and once done the punishment cannot be amended!! ...read more.