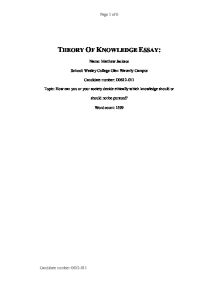 It was a German philosopher Immanuel Kant, who created an entirely new school of ethics in "Kantian" ethics. Under Kantian ethics, rational moral individuals have a certain intrinsic value, and so cannot be weighed on a scale as Utilitarian ethics suggest. Kantianism holds that individuals should not be sacrificed for the common good. Finally, it argues that motive is of the utmost importance, i.e. an action is unethical regardless of its outcome, if its initial intent was malicious. Closely linked to Kantian ethics is the 'natural rights theory' that is, that rational beings have intrinsic rights, the right to live, the right to freedom, property. Few ethicists can agree on exactly what these 'rights' are. Under these the ethicality of stem cell research depends on both whether you regard a foetus as a moral being, thereby privy to rights and liberties and whether you regard the research as violating those rights. My relationship problem is less controversial, in undertaking a relationship with Sal she has trusted me with her feelings, and has the right to have that trust honoured, and it would violate her right to hurt her. Ethical theories that imply a set of natural rights are indeed well merited, but as with utilitarianism it is a flawed ideology. ...read more.

Obviously this system has its faults: first some of the criteria are not pertinent to every decision. Also it is sometimes difficult for all parties concerned to participate: for example if one were to decide on the ethicality of aborting a foetus, then the decision concerns the potential person in question, but they are unable to submit their opinion. Likewise if we were to consider my initial example of my girlfriend, then the decision concerns both her and Warwick certainly, but if I were to ask them to offer their opinion on the ethicality of the matter, then the decision would be made already. These faults are simply something inherent to the method, and must be tolerated, they are not ideal, but neither are they so gross as to invalidate the system totally. The system has many merits and despite its faults is likely the best proposal here, basing the system around principals rather than theories makes the system simpler for the layman, less controversial for the philosophers, and flexible in its application. I feel that the best way to make an decision on the pursuit of knowledge, or for that matter any ethical dilemma is to weigh it against the principals which are set out above, but all techniques are flawed in some way and it is the prerogative of any rational being to make her own choice. ...read more.