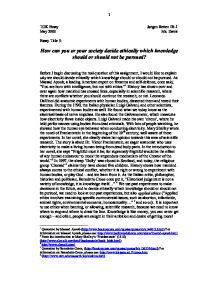 TOK Essay J�rgen Reiten IB-1 May 2003 Ms. Davis Essay Title 3: How can you or your society decide ethically which knowledge should or should not be pursued? Before I begin discussing the real question of this assignment, I would like to explain why we should decide ethically which knowledge should or should not be pursued. As Massad Ayoob, a leading American expert on firearms and self-defence, once said, "You are born with intelligence, but not with ethics."1 History has shown over and over again how mankind has crossed lines, especially in scientific research, where there are conflicts whether you should continue the research, or not. Leonardo DaVinci did anatomic experiments with human bodies, dissected them and tested their features. During the 1790, the Italian physician Luigi Galvani, and other scientists, experimented with human bodies as well. He found what we today know as the electrical basis of nerve impulses. He also found the Galvanometer, which measures how electricity flows inside objects. Luigi Galvani made his own 'circus', where he held performances using bodies from dead criminals. With lots of people watching, he showed how the human eye behaved when conducting electricity. Mary Shelley wrote the novel of Frankenstein in the beginning of the 19th century, well aware of these experiments. ...read more.

As the earth itself is the society, there are lots of problems - culture, traditions, religion, faith, beliefs, economic systems, and so on. All people are different, and we share different values and opinions. 'Clonaid', for example, keeps a sub-heading on their Internet page saying, "Yes to human cloning"6. They claim they are descendants of aliens - this is their faith. Islam practises many traditions, in fact, keeping up with the traditions is one of the most important things in the Muslim religion. They don't eat pork meat, Hindus don't eat cow meat. Many Africans are for circumcision, while Western countries are against. Then, if we in the 'Earth-society' share so many different opinions, how can we make an ethical decision together without agreeing on what is right and wrong behaviour? "When it comes to practicing good ethics, saying no to a vice is not good enough. A quality life is never achieved by focusing on the elimination of what is wrong. True success requires you to focus your mental, emotional, and spiritual energies on pursuing that which is right and good. Trying to become virtuous merely by excluding vice is as unrealistic as trying to cultivate roses simply by eliminating weeds."7 Culture and religion are so important to human beings - we are willing to die for them! ...read more.

Someone has to be in charge and make sure everything is going all right, which by the definition is a government. I think it is impossible ever for a society to make an ethical decision together. Even inside the body, some cells want sugar and harmful substances, while other cells say "No!", it's too harmful. As I've mentioned, "You are born with intelligence, but not with ethics".9 We evolve our own ethics, and in my opinion, we should vote democratically on which knowledge should or should not be pursued. As knowledge is experience, we would only have to sit back, experience, and vote for further ethical decisions. I agree with The Beatles, who sing "There will be an answer - let it be!" Bibliography - http://brainyquote.com - http://www.clonaid.com - http://www.kirjasto.sci.fi/croce.htm - http://www.nlm.nih.gov/hmd/frankenstein/frank_birth.html - "Frankenstein - The Modern Prometheus" by Mary Shelley (1818) - http://web.quipo.it/frankenstein/thenewreality.htm - The Internet Encyclopedia of Philosophy: http://www.utm.edu/research/iep/e/ethics.htm - http://www.backwoodshome.com/store/files/cd-ayoob.html - International Baccalaureate Economics HL coursework on supply, demand, market forces and economic systems. - "Kafka - for en mindre litteratur", written by Gilles Deleuze and F�lix Guattari. Pax Forlag A/S, Oslo 1994. Translated into Norwegian by Knut Stene-Johansen. (Title of book in English, own translation, "Kafka, for a smaller literature")' - "Anti-oedipus - Capitalism and Schizophrenia", by Gilles Deleuze and F�lix Guattari. Translated by Robert Hurley, Mark Seem, Helen R. Lane. Preface by Michel Foucault. University of Minnesota Press, Minneapolis, 2000. ...read more.