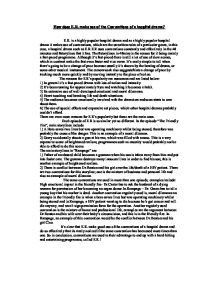 How does E.R. make use of the Conventions of a hospital drama?

How does E.R. make use of the Conventions of a hospital drama? E.R. is a highly popular hospital drama and as a highly popular hospital drama it makes use of conventions, which are the unwritten rules of a particular genre, in this case, a hospital drama such as E.R.E.R uses conventions constantly and effectively in the 48 minutes and 8storylines that it has. The 8storylines in 48mins is the reason for it being mainly a fast-paced programme. Although it's fast-paced there is still a lot of use of slow scenes, which in contrast make the fast even faster and vice versa. It's easily simple to tell when there's going to be a change of pace because usually it's shown by the beating of drums, or some other musical instrument. ...read more.

Each episode of E.R is so similar yet so different. In the episode "The Friendly Fire", main storylines include: 1) A Hero saves two lives but was operating machinery whilst being stoned, therefore was probably the cause of the danger. This is an example of a moral dilemma. 2) Gerry accidentally shoots a gun at his van, which was filled with ammo. This is a very expensive scene of heightened realism; programmes such as casualty would probably not be able to afford to do this scene. The main storylines in "Rampage" are: 1) Father of an abused child becomes a gunman when his son is taken away from him and put into foster care. ...read more.

and in Rampage, a HIV patient wanting to die because he's got cancer and will die anyway, and won't sign permission form for the operation. Another regularly used convention is the mixture of home and professional life, examples are the argument between Dr.Benton and his wife over their baby's circumcision, and this is in the friendly fire. In Rampage, an example of this convention would be the conflict between Dr.Benton and his girl Cleo. It's clear that E.R. make good use of the conventions of a hospital drama and do so effectively that its rarely noticed if the same convention has been used more times than one. So in conclusion, conventions are used to their advantage to end up with a hard-hitting and entertaining programme, called E.R.! ...read more.