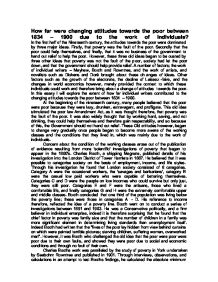 How far were changing attitudes towards the poor between 1834 - 1900 due to the work of individuals? In the first half of the Nineteenth century, the attitudes towards the poor were dominated by three major ideas. Firstly, that poverty was the fault of the poor. Secondly that the poor could help themselves, and finally, that it was no business of the government to hand out relief to help the poor. However, these three old ideas began to be ousted by three other ideas that poverty was not the fault of the poor, society had let the poor down, and that the government should help provide relief. A number of factors; the work of individual writers - Mayhew, Booth and Rowntree, and the work of artists, and novelists such as Dickens and Dor� brought about these changes of ideas. Other factors such as the growth of the electorate, the decline of Laissez-faire, and the changes in world economics however, merely provided the context to which these individuals could work and therefore bring about a change of attitudes towards the poor. In this essay I will explore the extent of how far individual writers contributed to the changing attitudes towards the poor between 1834 - 1900. At the beginning of the nineteenth century, many people believed that the poor were poor because they were lazy, drunken, extravagant, and profligate. This old idea stimulated the poor law Amendment Act, as it was thought therefore, that poverty was the fault of the poor. It was also widely thought that by working hard, saving, and not drinking, they could help themselves and therefore gain respectability, and so because of this, the Government should not hand out relief. These Old attitudes however, began to change very gradually once people began to become more aware of the working classes and the conditions that they lived in, which was mainly due to the work of individuals. ...read more.

Therefore novels were very effective in slowly changing attitudes, as Dickens and Gaskell humanised poverty to a wide-ranging audience. Other individuals also played a part in the changing of attitudes towards the poor during 1834 - 1900. William Booth, founder of the salvation Army, published a pamphlet in 1890 entitled 'In Darkest England and the Way Out' in which he portrayed the working class districts as more remote than darkest Africa in terms of their remoteness from the experience of the Upper and Middle classes. This idea therefore led to that the feeling that the condition of the working classes posed some kind of nameless threat to civilised standards, proved a potent force in promoting the acceptability of social reform to benefit the poor. Another influential individual working in the period 1834 - 1900 was the 'New Liberal' David Lloyd George. Speaking in 1890, he proclaimed; "what are the real causes of poverty among the industrial classes? Old age, bad health, the death of the breadwinner and unemployment due to the running down of industries or the depressions in trade" this however, is clearly astounding, as it was said almost 10 years before the work of Rowntree was published and indeed summarises his findings, and so when Rowntrees work was published, it clearly had more influential power to change attitudes due to it. However, despite the influence that all the individuals clearly exerted towards the changing attitudes towards the poor during 1834 - 1900, they acted in favourable circumstances, working in a context that clearly helped them. The first factor that clearly benefited the work of the individuals was the growth of the electorate. The 1832 Reform Act made little difference to the attitudes towards the poor. It was supposed to give the middle class the vote, get rid of rotten boroughs, and to give seats to the industrial centres, and to finally break the power of the Tory landowners. ...read more.

Helen Bosanquet was a firm believer of this right up to 1900. These individuals then, act in a way and accordance to promote the new ideas. These three new ideas and attitudes towards the poor did not have an immediate impact. In 1859 Samuel Smiles thought that people should help themselves and not rely on the government. In 1869, Boasanquets COS gave "only enough charity to put them on their feet" and finally in 1871 there was a renewed crackdown on the able bodied poor. However, although not everyone took on board the slow changes in attitudes towards the poor after 1834, by 1900 people recognised that society had let the poor down, that the poor weren't responsible for their own condition, and that if poverty was caused by social and economic conditions, then the government ought to provide a role in providing relief. Individuals however, mainly brought this about. So despite individuals being successful in changing the old attitudes towards the poor, along with political and economical changes, these changes only partly changed attitudes towards the poor. The greatest use of these political and economical changes were providing context that actually aided the highly influential individuals to work and change the old ideas. But due to the work of these individuals, working in a context that was actually helping them, people became more aware that the poor couldn't get themselves out of poverty by themselves, they needed help. Therefore this was a great shift in attitudes from the poor being idle, profligate, lazy and poor because of their own faults. The new attitudes regarding the poor were followed up by the 'New Liberal' Government of 1906 who regarded the absence of attempts to tackle poverty as a moral wrong, and due to the genuine fear of socialism, were more than willing to attempt to improve the conditions of the poorer working classes after the landslide victory in 1906. ...read more.