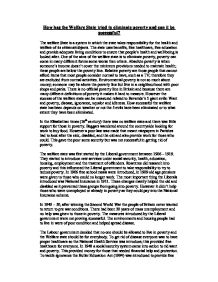 How has the Welfare State tried to eliminate poverty and can it be successful?

How has the Welfare State tried to eliminate poverty and can it be successful? The welfare State is a system in which the state takes responsibility for the health and welfare of its citizens/subjects. The state uses benefits, free healthcare, free education and provide adequate living conditions to ensure that people's health and well being is looked after. One of the aims of the welfare state is to eliminate poverty, poverty can come in many different forms some worse then others. Absolute poverty is when someone's income doesn't cover the minimum provisions needed to maintain health; these people are below the poverty line. Relative poverty are those people that cannot afford items that most people consider normal to have, such as a TV; therefore they are excluded from normal activities. Environmental poverty is not so much about money; someone may be above the poverty line but live in a neighbourhood with poor shops and parks. There is no official poverty line in Britain and because there are many different definitions of poverty it makes it hard to measure. ...read more.

There had been 20 years of mass unemployment and no help was given to those in poverty. The measures introduced by the Liberal government were not proving successful. The environments and housing people had to live in were of poor condition and helped spread disease. The Labour government decided that no one should be allowed to live in poverty and the Welfare state should be for everybody. To get rid of disease everyone was to have proper healthcare so the National Health Service was introduce; this provided free healthcare for everyone. In 1948 a social security system came into action to rid want and poverty. This provided money for those that needed financial help and protection. To tackle ignorance the Butler Education Act (1994) was introduced to provide free secondary state education to all, in 1947 the leaving age was raised to 15. To remove squalor poor housing was got rid of and it was replaced with adequate state and private provision. ...read more.

It has also not succeeded in getting rid of relative poverty, as there are people who cannot afford things that others take for granted. The NHS has meant that there are fewer diseases and people live longer, however there are long waiting lists for treatment. Everyone has a chance to an education and the leaving age is 16 however there are still some youths that come out of school with no qualifications. The old slums from before the war have been demolished and in their place new housing has been put up, although some of these places are no nicer to live in. Unemployment is still high although the state does provide training and job opportunities. Looking at Britain today to eliminate poverty would be a very hard thing to do. To provide free services for everyone who needs it the taxes would have to be increased. Taxes are a very unpopular thing and parties usually promise to lower taxes so as to get more votes. Therefore spending on the Welfare state cannot be improved in this way. ...read more.