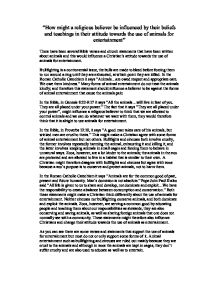 "How might a religious believer be influenced by their beliefs and teachings in their attitude towards the use of animals for entertainment" There have been several Bible verses and church statements that have been written about animals and this would influence a Christian's attitude towards the use of animals for entertainment. Bullfighting is a controversial issue, the bulls are made to bleed before forcing them to run around a ring until they are exhausted, at which point they are killed. In the Roman Catholic Catechism it says "Animals...are owed respect and appropriate care. We owe them kindness." Many forms of animal entertainment do not treat the animals kindly; and therefore this statement should influence a believer to be against the forms of animal entertainment that cause the animals pain. ...read more.

In the Bible, in Proverbs 12:10, it says "A good man takes care of his animals, but wicked men are cruel to theirs." This might make a Christian agree with some forms of animal entertainment but not others. Bullfights and circuses both involve cruelty, the former involves repeatedly harming the animal, exhausting it and killing it, and the latter involves keeping animals in small cages and forcing them to behave in unnatural ways. Zoos, however, are a lot kinder to the animals; the animals in the zoo are protected and are allowed to live in a habitat that is similar to their own. A Christian might therefore disagree with bullfights and circuses but agree with zoos because a zoo's purpose is to conserve and protect animals, not to harm them. ...read more.

Neither circuses nor bullfighting conserve animals, and both dominate and exploit the animals. Zoos, however, are serving a common good by educating people and teaching them about our responsibilities as stewards, they are also conserving and saving animals, as well as sharing foreign animals that one does not normally see with a community. These statements might therefore also influence Christians and change their attitude towards the use of animals as entertainment. As you can see there are some verses and statements that support the use of animals for entertainment but most do not or only support some forms of it. Animal entertainment such as bullfighting and circuses are ruled out mainly because they are cruel to the animals and although in zoos the animals are kept in cages, they don't suffer cruelty and are also used to educate as well as to entertain. ...read more.