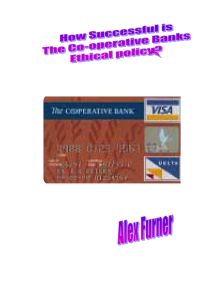 I. Front Page II. Contents III. What are business ethics? IV. How can a firm benefit from having an ethical policy? V. About the Bank. VI. The Policy- Targets. VII. The Policy- Targets. VIII. Where's the Evidence? IX. Profits and Share Price. X. Profits and Share Price. XI. Can you be Ethical and Profitable? XII. Public image. XIII. What I Think. XIV. Conclusion. Ethics is a large area of philosophy that has been debated for thousands of years. The dictionary states that ethics 'is a system of rules and principles that should govern the moral behaviour of human beings.' Basically ethics tell us what is right or wrong. Business ethics are a set of values, or a morel code that governs the behaviour of a company. A strong ethical policy would have several implications on the running of a firm. 1. The product itself would have to fit with that policy e.g. a company which is against animal testing would not sell a product that has been tested on animals. 2. The way products are made would have to be considered, as the inputs from the product would have to support the policy. ...read more.

The policy has several key areas of focus. These all come under 5 headings: Human Rights: The bank will not invest in: 1. An organisation that takes away an individuals rights. 2. An organisation that is involved in manufacturing equipment that is used for the violation of human rights. The Arms Trade: The bank will not invest in the manufacture, sale, production or brokerage of arms to any oppressive country. Trade and Social Involvement. The bank will encourage: 1. A business that promotes Fair Trade. N.B. 'Fair Trade' is an organisation that buys products from foreign farmers at a reasonable price and then markets them in English retailers. 2. Customers or suppliers who take a stance on ethical dealings with a third world country. 3. Organisations such as co-operatives, charities ect... 4. Suppliers with the same sort of ethical policy. In addition, the bank will insure their customer's money will not finance any of the following: 1. Money laundering for drug trafficking, terrorism or any other crimes. 2. The trading of currency in developing countries for non-productive purposes. 3. The manufacture of tobacco products. ...read more.

The Co-Operative Banks ethical policy is very successful in addressing these concerns. They have manufactured their policy to be productive as well as insuring they will remain profitable in the future. I also think that the Government should take more action to force large companies to have an affective ethical policy, to stop negative externalities, human rights abuse ect... I also question the intention on the management, whether this policy was derived to help the world, or to increase profits. If it is the latter, then the true extent of investment into chartable organisations is likely to be minimal, but amplified by the company's public relations team. This could be proved by the huge profits the company has made, more of which could be invested into these charitable organisations, especially when comparing to the amount of money actually invested into them. The company's ethical policy has been a success. This is show by: > The development of an ethical policy by the consumer, for the consumer > The implementation of the ethical policy into: o Preventing inappropriate investment, o Funding charitable organisation. > The way in which the staff are treated. > Increasing profit o Arguably as a result of the policy > Maintaining good customer relations. XIII ...read more.