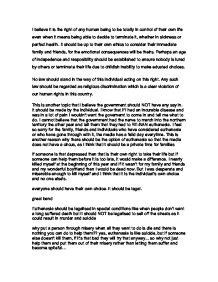 I believe it is the right of any human being to be totally in control of their own life even when it means being able to decide to terminate it, whether in sickness or perfect health.

I believe it is the right of any human being to be totally in control of their own life even when it means being able to decide to terminate it, whether in sickness or perfect health. It should be up to their own ethics to consider their immediate family and friends, for the emotional consequences will be theirs. Perhaps an age of indepedence and resposibility should be established to ensure nobody is lured by others or termimate their life due to childish inability to make eduated choices. No law should stand in the way of this individual acting on this right. Any such law should be regarded as religious discrimination which is a clear violation of our human rights in this country. This is another topic that i believe the government should NOT have any say in. It should be made by the individual. I know that if i had an incurable disease and was in a lot of pain I wouldn't want the governemt to come in and tell me what to do. I cannot believe that the government had the nerve to march into the northern territory the other year and tell them that they had to RE-BAN euthanasia. I feel so sorry for the family, friends and individuals who have considered euthanasia or who have gone through with it, the media has a feild day everytime. This is another reason why there should be the option of euthanasia so that the media does not have a circus, as I think that it should be a private time for families If someone is that depressed then that is their own right to take their life but if someone can help them before it is too late, it would make a difference. I nearly killed myself at the beginning of this year and if it wasn't for my family and friends and my wonderful boyfriend then I would be dead now. ...read more.

But I was desperate and miserable enough to kill myself and I think that it is the individual's own choice and no one else's everyone should have their own choice. it should be legal. There can never really be a "right" to life if there is no "right" to death. It is just the flip side of the coin, and must be ackowledged as such. How can you have full control over your life if you cannot take an active role in it's end, if that is what you wish Choice is the most precious thing we have, it is what defines us as who we are as individuals If someone is sick and choses to no longer live, what right do we have to say no, this is a personal decision and up to that person, no one else I just hope that if i end up 80 years old and unable to ealk, communicate, etc, some kind person will come and give me a lethal injection Euthanasia is very similar to the topic of abortion!. It depends on the circumstances surrounding the isssue and weather euthanasia would be applicable. If there was terminally ill person dieng and in great pain, i don't know how anyone could make a decsion on weather to let them live or die! people should get the choise as it is there life that is going to end.. and if they are in pain and going to die anyway .. well it should be there choise Yes legalise it definitely put the poor people out of their misery if that's what they want. What's the point in wasting time and resources on someone who doesn't want to be here. everyone dies it's just a matter of how and when, personally I'd rather die then be kept alive by machines or be a vegetable. I would put more emphasis on the quality of life rather than the length. ...read more.

we don't need no more stinkin' old people cluttering up the public hospitals and smelling of talcum powder...or if they are going to hang around, they can at least get me a good christmas present...not another pair of shoddy underpants, I believe that euthanasia should be allowed, as I know that if I was dying in pain I would want it to stop. Euthanasia can also be easier on the family as no one wants to see some one in a lot of pain especially a relative. The trouble is that doctors are trained to save lives not end them , but if you are dying anyway it should not be in pain. I would not want my family to watch me die in pain as death is already hard enough. I think Euthanasia should be allowed to go ahead because people who are in pain and suffering from a fatal disease should be allowed to decide that they want to die. Just say no! If someone else does it to someone, it's aiding a suicide. If someone does it to them selves it's suicide. Just die naturally! Everybody just wants everything when they want! He who waits... er, well, I forget the rest!, once you start it, who knows where it's gonna stop. i'm all for just letting the person get off their treatment and let die a natural death, but not for the actual killing of a person. It's not right., unsure, give this generation a fair go! No way! if it is allowed for some circumstances, acceptors will be made and we will end up picking and choosing who should live and die. Mixed feelings, but no. There are enough drugs to stop peoples pain. In the future it may be just a way to knock off the old dudes, and that's not on. .well I think its fair enough if people are in a lot of pain but I also think its hard on doctors if they have to be the ones giving the injection. In the end I think it should be ok but on special circumstances. ...read more.