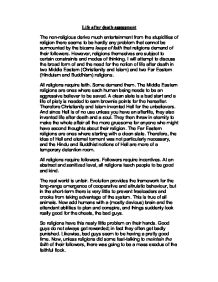 I will attempt to discuss the broad form of and the need for the notion of life after death in two Middle Eastern (Christianity and Islam) and two Far Eastern (Hinduism and Buddhism) religions.

Life after death assessment The non-religious derive much entertainment from the stupidities of religion there seems to be hardly any problem that cannot be surmounted by the bizarre leaps of faith that religions demand of their followers. However, religions themselves are subject to certain constraints and modes of thinking. I will attempt to discuss the broad form of and the need for the notion of life after death in two Middle Eastern (Christianity and Islam) and two Far Eastern (Hinduism and Buddhism) religions. All religions require faith. Some demand them. The Middle Eastern religions are ones where each human being needs to be an aggressive believer to be saved. ...read more.

Therefore, the idea of Hell and eternal torment was not particularly necessary, and the Hindu and Buddhist notions of Hell are more of a temporary detention room. All religions require followers. Followers require incentives. At an abstract and sanitized level, all religions teach people to be good and kind. The real world is unfair. Evolution provides the framework for the long-range emergence of cooperative and altruistic behaviour, but in the short-term there is very little to prevent freeloaders and crooks from taking advantage of the system. This is true of all animals. Now add humans with a (mostly devious) brain and the attendant abilities to plan and conspire, and things suddenly look really good for the cheats, the bad guys. ...read more.

And don't think that death is the end of everything. You will live on in your eternal soul and reap what you sow. So much is common between the Middle East and the Far East. Christianity and Islam have the notion of an eternal soul, a single lifetime, and eternal bliss or damnation. In Buddhism and Hindu Your eternal soul keeps being reborn innumerable times and the sins of the previous birth are punished. Breaking out of the cycle of birth is the goal of all Buddhism and Hindu believers In conclusion Buddhism and Hindu are fairer religions because they believe in a second chance un-like Christianity and Islam who only give you one chance to live a good live. By Josh Buckle 9I ...read more.