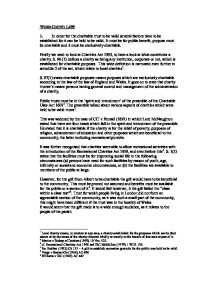 In order for the charitable trust to be valid several factors have to be established for it can be held to be valid. It must be for public benefit, purpose must be charitable and it must be exclusively charitable.

WORD COUNT: 1,499 1. In order for the charitable trust to be valid several factors have to be established for it can be held to be valid. It must be for public benefit, purpose must be charitable and it must be exclusively charitable. Firstly we need to look at Charities Act 1993, to have a look at what constitutes a charity. S. 96 (1) defines a charity as being any institution, corporate or not, which is established for charitable purposes. This wide definition is narrowed even further in schedule 2 of the act, which relate to local charities1. S. 97(1) states charitable purposes means purposes which are exclusively charitable according to the law of the law of England and Wales. It goes on to state that charity trustee's means persons having general control and management of the administration of a charity, Public trusts must be in the 'spirit and intendment' of the preamble of the Charitable Uses Act 16012. The preamble talked about various aspects of charities which were held to be valid trusts3. This was widened by the case of CIT v Pemsel (1891) in which Lord McNaughton stated that there are four heads which fall in the spirit and intendment of the preamble. He stated that it is charitable if the charity is for the relief of poverty, purposes of religion, advancement of education and other purposes which are beneficial to the community, the latter including recreational pursuits. ...read more.

However if the property is transferred in this way then the council must hold the trust in the same way as the previous trustees did12. Indeed S.139 Local Government Act 1972 allows a local authority to hold the land on trust for the inhabitants of a community. The trustee's would have various issues to address whether they can dispose of the land before any transfer would take place. * Do they have a power to dispose of the land The trustee's would have a power of sale under S.6 (1) TOLATA13, which gives right of absolute ownership, if no effect is given expressly in the trust instrument. It would also require the consent of the commissioners and any proceeds from any sale would have to be used for the purchase of a similar purpose14. * Is the disposal beneficial to the charity Any disposal must be in the interests of the charity and its beneficiaries. If land has been sold then it is to be replaced with like land suitable for the purpose which it was intended. Is it unlikely that consent or an order is required, as the charity is seeking to replace the land with land of a similar nature. This is part of an exception granted by the Charity Commissioners; otherwise an order would need to be granted. * Are the terms of the disposal the best that can be obtained The charity must be satisfied that by entering into a contractual agreement with the ...read more.

It has been held in Re: King20 that if a gift is made, but a surplus remains then the doctrine of cy pres should apply. There is no requirement however to show a charitable intent or an 'out and out' gift to charity21, as this would have been shown when the charity was initially set up22. It has been held that surplus funds left over after a sale of land must be invested into a similar cause or back into the charity. If unable to invest the monies back into the land, then it would held be held on resulting trust and go back to the deceased estate. It is not necessary to obtain an order from the Charity Commissioners as they are under an obligation to obtain the best price and "where the land sold was used to produce an investment income in which case the proceeds can normally be used to purchase investments designed to generate income"23. They must also be satisfied that to build a centre is most beneficial to the charity and would not create hostilities within a class of the community and or the beneficiaries themselves. It would be possible to set up centre for the elderly under the Recreational Charities Act 1958, in which it allows facilities to be available for the elderly members of the community24, providing it is in the interests of social welfare25 but the proceeds must be used to put back into the charity and enhance its income and investment for the inhabitants of the community. ...read more.