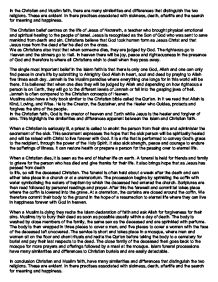 In the Christian and Muslim faith, there are many similarities and differences that distinguish the two religions. These are evident in there practises associated with sickness, death, afterlife and the search for meaning and happiness.

In the Christian and Muslim faith, there are many similarities and differences that distinguish the two religions. These are evident in there practises associated with sickness, death, afterlife and the search for meaning and happiness. The Christian belief centres on the life of Jesus of Nazareth, a teacher who brought physical emotional and spiritual healing to the people of Israel. Jesus is recognised as the Son of God who was sent to save mankind from death and sin. Christians believe that God took human form as Jesus Christ and that Jesus rose from the dead after he died on the cross. We as Christians also trust that when someone dies, they are judged by God. The righteous go to Heaven and the sinners go to h**l. In heaven there will be joy, peace and righteousness in the presence of God and therefore is where all Christians wish to dwell when they pass away. ...read more.

In the Christian faith, God is the creator of heaven and Earth while Jesus is the healer and forgiver of sins. This highlights the similarities and differences apparent between the Islam and Christian faith. When a Christian is seriously ill, a priest is called to anoint the person from their sins and administer the sacrament of the sick. This sacrament expresses the hope that the sick person will be spiritually healed and will be raised with Christ to live forever with God. It is a rite that is performed to convey God's grace to the recipient, through the power of the Holy Spirit. It also sick strength, peace and courage to endure the sufferings of illness. It can restore health or prepare a person for the passing over to eternal life. When a Christian dies, it is seen as the end of his/her life on earth. ...read more.

Muslims try to bury their dead as soon as possible usually within a day of death. The body is washed by close members of the family, the same s*x as the deceased and are sprinkled with perfume. The body is then wrapped in three pieces to cover a man, and five pieces to cover a woman with the face of the deceased left uncovered. The service is short and takes place in a mosque, where men and women sit on the floor and chant rituals and recite the Qur'an before taking the body to a cemetery for burial and pay their last respects to the dead. The close family of the deceased then goes back to the mosque for more prayers and offerings followed by a meal at the mosque. Islam funeral processions have many similarities and differences to Christian burials and are easily detectable. In conclusion Christian and Muslim faith, have many similarities and differences that distinguish the two religions. These are evident in there practises associated with sickness, death, afterlife and the search for meaning and happiness. ...read more.