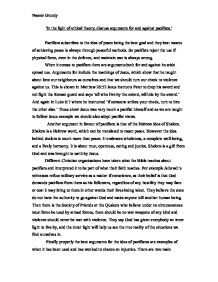 'In the light of ethical theory, discuss arguments for and against pacifism.'

'In the light of ethical theory, discuss arguments for and against pacifism.' Pacifism subscribes to the idea of peace being the best goal and they best means of achieving peace is always through peaceful methods. So pacifists reject the use if physical force, even in the defence, and maintain war is always wrong. When it comes to pacifism there are arguments both for and against its wide spread use. Arguments for include the teachings of Jesus, which show that he taught about love our neighbours as ourselves and that we should turn our cheek to violence against us. This is shown in Matthew 26:52 Jesus instructs Peter to drop his sword and not fight the Roman guard and says 'all who live by the sword, will die by the sword.' And again in Luke 6:7 where he instructed 'if someone strikes your cheek, turn to him the other also.' These show Jesus was very much a pacifist himself and as we are taught to follow Jesus example we should also adopt pacifist views. ...read more.

The second example is that of the Hindu, Indian leader Mahatma Gandhi who through peaceful methods fought to overcome British rule in India. Both these men however did lose their life. Arguments against it come from such people as Jeff McMahan, the Roman Catholic Church and the just war theory. Then there are the arguments against pacifism the first of these comes from Jeff McMahan who insists that pacifism is difficult to maintain. He believes this to be the case as it takes away the decision of a victim whether a violent response is just. Pacifism expects a person to stay non-violent in every situation. Which can be very difficult if you are faced with violence against you. So another problem which arises from this is that pacifism treats every situation as the same whereas in fact situations are very different and unique. The argument against pacifism put forward by the Roman Catholic Church. They say that it is your duty to try and stop sin or wickness if it arises using whatever means necessary to overcome it. ...read more.

However for it to be able to exist you need a society where every evil or conflict can overcome by using peaceful means. Seen, as we don't live in a society like that it would be very difficult to live by pacifisms principles, about the best means of achieving peace is always through peaceful methods, making conflict inevitable as it is the only way of dealing with many of the evils in today's society. So as it has been said "to secure peace, is to prepare for war". Also how realistic is it to be able to stay peaceful when you are faced violence either against you or you property. I know if I found my self in a situation where I was faced with violence I would feel that meeting violence with violence was justifiable. So basically I pacifism is a great idea but putting it into practice in the type of society we live in today just wouldn't we are faced with to many evils that wont be removed by peaceful means. Naomi Grundy ...read more.