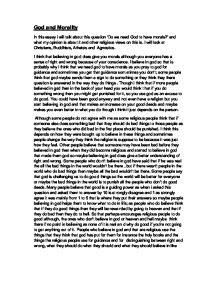 In this essay I will talk about this question Do we need God to have morals? and what my opinion is about it and other religious views on this is. I will look at Christians, Buddhists, Atheists and Agnostics.

God and Morality In this essay i will talk about this question 'Do we need God to have morals?' and what my opinion is about it and other religious views on this is. I will look at Christians, Buddhists, Atheists and Agnostics. I think that believing in god does give you morals although you everyone has a sense of right and wrong because of your conscience. I believe in god so that is probably why i think that we need god to have morals as you pray to god for guidance and sometimes you get that guidance sometimes you don't; some people think that god maybe sends them a sign to do something or they think they there question is answered in the way they do things. Though i think that if more people believed in god then in the back of your head you would think that if you do something wrong then you might get punished for it, so you use god as an excuse to do good. You could have been good anyway and not even have a religion but you start believing in god and that makes an increase on your good deeds and maybe makes you even better in what you do though i think it just depends on the person. ...read more.

So that perhaps encourages religious people to do good although, the ones who don't believe in god or heaven and hell maybe think there if no point in believing as none of it is real and why do good if you're not going to get anything out of it. People who believe in god and that are religious use the things that they think that god has put for them for instance the holy books and the things the religious people use for guidance and for distinguishing between right and wrong, what they should do what they should and what they should believe in like the Bible, Quran, Torah, and many more that help to lead them to believe that what they're doing is the right thing. Buddhists say that believing in god makes no difference to morality and whether god exists, but they believe that morality is a big part of life as it helps to take them on a path (dharma) and they believe that morality is not from god as they are meant to follow the rules that the Buddha taught them to follow. ...read more.

To conclude I think that it's not believing in god that gives morality but it is what they believe in and what the people believe themselves what right and wrong is. Though i also believe that having a religion guides people to a better understanding of doing good as they know what they need to do to get a good life or to go to heaven or something like that. There are many different views and all know that there is a sense of right and wrong in everybody, though I think that people behaving badly could influence other people as the people you look up to could do bad and you want to be just like them so you do the same thing. So i think that you don't need god to behave properly as it is just what you do that influences everyone else around you. Although people who believe in god use him as guidance and help everyone is different if someone thinks that something is right someone else may think it's wrong. So it just depends on what people think as everyone builds up their own standards that they want to follow. ...read more.