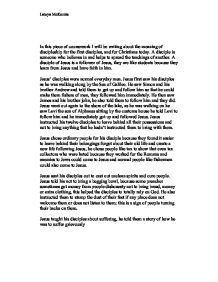 In this piece of coursework I will be writing about the meaning of discipleship for the first disciples, and for Christians to

In this piece of coursework I will be writing about the meaning of discipleship for the first disciples, and for Christians today. A disciple is someone who believes in and helps to spread the teachings of another. A disciple of Jesus is a follower of Jesus, they are like students because they learn from Jesus and have faith in him. Jesus' disciples were normal everyday men. Jesus first saw his disciples as he was walking along by the Sea of Galilee. He saw Simon and his brother Andrew and told them to get up and follow him so that he could make them fishers of men, they followed him immediately. He then saw James and his brother john, he also told them to follow him and they did. Jesus went out again to the shore of the lake, as he was walking on he saw Levi the son of Alphaeus sitting by the customs house he told Levi to follow him and he immediately got up and followed Jesus. Jesus instructed his twelve disciples to leave behind all their possessions and not to bring anything that he hadn't instructed them to bring with them. Jesus chose ordinary people for his disciple because they found it easier to leave behind their belongings forget about their old life and create a new life following Jesus, he chose people like tax to show that even tax collectors who were hated because they worked for the Romans and enemies to Jews could come to Jesus and normal people like fishermen could also come to Jesus. ...read more.

James and John replied they could. Jesus said to them 'the cup that I must drink you shall drink, and with the baptism with which I must be baptised you shall be baptised, but as for seats at my right hand or my Left, these are not mine to grant; they belong to those to whom they have been allotted Jesus and his disciples went to a small estate, Gethsemane he told his disciples to stay awake while he went off to pray. Jesus took peter, James and John and said to them "My soul is sorrowful to the point of death, wait here and keep awake". Jesus went away and prayed, when he came back the disciples were asleep, he said to Peter, "are you sleeping, had you not the strength to keep awake one hour? You should be awake and praying not to be put to the test, the spirit is willing but the flesh is weak". Jesus went away to pray a second time and came back to find his disciple sleeping yet again, he said the same words and went away to pray again. Jesus came back a third time to find them asleep yet again. Jesus said to them "you can sleep now. It is over. The hour has come. Now the son of man is to be betrayed into the hands of sinners, get up! ...read more.