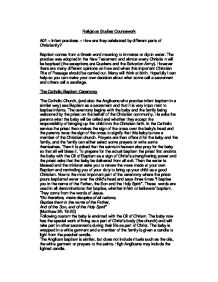 Infant practises - How are they celebrated by different parts of Christianity?

Religious Studies Coursework A01 - Infant practises - How are they celebrated by different parts of Christianity? Baptism comes from a Greek word meaning to immerse or dip in water. The practise was adopted in the New Testament and almost every Christian will be baptised (the exceptions are Quakers and the Salvation Army). However there are many different opinions on how and when this important Christian Rite of Passage should be carried out. Many will think at birth. Hopefully I can help so you can make your own decision about what some call a sacrament and others call a sacrilege. The Catholic Baptism Ceremony The Catholic Church, (and also the Anglicans who practise infant baptism in a similar way) see Baptism as a sacrament and that it is very important to baptise infants. The ceremony begins with the baby and the family being welcomed by the priest on the behalf of the Christian community. He asks the parents what the baby will be called and whether they accept the responsibility of bringing up the child into the Christian faith. In the Catholic service the priest then makes the sign of the cross over the baby's head and the parents trace the sign of the cross to signify that this baby is now a member of the Christian church. ...read more.

Amen." He then gives the baby back to the parents and leads the congregation in prayer. The parents are then given a certificate. The words of the service are similar to infant baptism, but obviously baptism with water and symbolic rituals are missing. A02 - Referring to Christian Infant Rites explain their meaning and importance in the life of believers. Why do Christians baptise? To obey the command of Jesus in Matthew 28:19 to "Go therefore and make disciples of all nations, baptising them in the name of the Father, the Son and the Holy Spirit" Water is the symbol of life. The most important symbol in Baptism is water. Water has many deep meanings. It is widely used for cleaning, but it also brings life, and we would not be able to live without it. Water is powerful but as well as life giving, it can be destructive. Floods, torrential rain and tidal waves all represent the destructive force of water. Water also cleans and cleanses. Water in baptism signifies a new life and the death of the old sinful life and also the cleansing of sins when Jesus was sacrificed for us. The water in the Red Sea helped Moses escape form the Egyptians. In the story of Noah's Ark, the floods killed everyone except Noah's family and the animals. ...read more.

25,000,000 people have been baptised and because people don't believe when they have their baby baptised they don't bother to come to church. Average church attendance on Sunday service is just 500,000 people. Having said all this there are circumstances when many, if not all non-believers should partake in some of these services. If one partner in a relationship is a Christian should this stop them getting married in a Christian church, which would mean so much to one of them and still be an amazing occasion for the other. Indeed the non-Christian may convert into the Christian faith either because of their partner or because of the ceremony. A funeral for a non-believer could comfort their remaining family. In probably the largest issue a baptised baby will be given a start in the Christian church to take up if they want to later in life and it would be best if the baby had the Holy Spirit inside it. It is wrong to penalise the baby for the actions of the parents. Also if the church wants to increase the rapidly falling attendance figures then they could do with more people becoming Christians. Is the parents asking for a baptised baby not an act of God? Overall I would believe most ceremonies to be of benefit only to believers. However the marriage example above and also infant baptism could greatly benefit the falling members of the church and the people involved. ...read more.