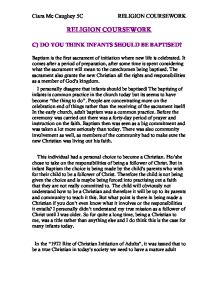 Infants should be baptised, discuss.

RELIGION COURSEWORK C) DO YOU THINK INFANTS SHOULD BE BAPTISED? Baptism is the first sacrament of initiation where new life is celebrated. It comes after a period of preparation, after some time is spent considering what the sacrament will mean to the catechumen being baptised. The sacrament also grants the new Christian all the rights and responsibilities as a member of God's kingdom. I personally disagree that infants should be baptised! The baptising of infants is common practice in the church today but its seems to have become "the thing to do". People are concentrating more on the celebration end of things rather than the receiving of the sacrament itself! In the early church, adult baptism was a common practice. Before the ceremony was carried out there was a forty-day period of prayer and instruction on the faith. Baptism then was seen as a big commitment and was taken a lot more seriously than today. There was also community involvement as well, as members of the community had to make sure the new Christian was living out his faith. ...read more.

In the "1972 Rite of Christian Initiation of Adults", it was issued that to be a true Christian in today's society we need to have a mature adult faith. With Baptism come commitments and responsibilities. An infant shouldn't be laden with these responsibilities until he/she learns how to be responsible, which I personally think happens when he/she is near adulthood. It may be argued that if Baptism was moved to an adult age then less people would make the commitment, but if we are taught and instructed on our faith and what exactly it entails then we could make the choice of whether we would be able to live up to these responsibilities rather than being made to live up to them, by the choice being made for us. Jesus himself taught us what exactly is needed to be a follower of Christ. "Whoever comes to me cannot be my disciple unless he loves me more than he loves his mother, father, brother, sister, wife and children and himself. ...read more.

We are told that we should look upon infant baptism as a community celebration. But Baptism in general is a community celebration whether it is performed on an infant or an adult. The community is welcoming a new Christian member. In infant baptism the community is hoping that the infant, one day, will accept Christ's love for him/herself. If Baptism was to be performed on adults then the community could be reassured that the individual was accepting Christ's love, as he/she would fully understand what it entails. I don't think infants should be baptised unless it is an extreme case, such as the child is near to death. I think infants should be taught and instructed on how to be a Christian until they fully understand its responsibilities and consequences and then have the choice of whether they are ready to take on such a role. Marriage, like Baptism is one of the seven sacraments. Marriage takes a lot of preparation and commitment and therefore I think Baptism should too! Ciara Mc Caughey 5C RELIGION COURSEWORK ...read more.