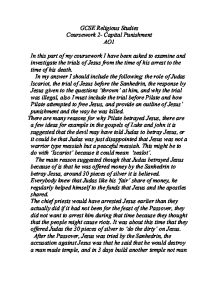 GCSE Religious Studies Coursework 2- Capital Punishment AO1 In this part of my coursework I have been asked to examine and investigate the trials of Jesus from the time of his arrest to the time of his death. In my answer I should include the following; the role of Judas Iscariot, the trial of Jesus before the Sanhedrin, the response by Jesus given to the questions 'thrown' at him, and why the trial was illegal, also I must include the trial before Pilate and how Pilate attempted to free Jesus, and provide an outline of Jesus' punishment and the way he was killed. There are many reasons for why Pilate betrayed Jesus, there are a few ideas for example in the gospels of Luke and john it is suggested that the devil may have told Judas to betray Jesus, or it could be that Judas was just disappointed that Jesus was not a warrior type messiah but a peaceful messiah. ...read more.

Each witness's evidence did not agree with the others' and so the whole of the Sanhedrin could not find any evidence against Jesus so that they could put him to death. Jesus' answer to the chief priest's question about if he had anything to say about the accusations was . . . well there wasn't one. Jesus remained silent. That was until Jesus was asked if he was the Christ, to which his answer was simply 'yes, and you will see the son of man sitting at the right hand of the father and coming on the clouds of heaven'. As this was said the priest tore his clothes, he did this because in those days when blasphemy was heard, as a gesture of anger you were to rip your clothes. Jesus could then be found guilty of blasphemy; he was then spat on, punched and beaten up by the guards, whilst he was blindfolded. ...read more.

Also the case was completed within the day, whereas if Jesus was to be found guilty then the case should have lasted at least two, these reasons alone can prove that the trial was illegal. The way Jesus was treated during and before his death was appalling. Archaeologists and many historians provide us with information about execution by crucifixion. * Prisoner was beaten with cat 'o' nine tails whip. * He was made to carry the cross to the crucifixion site. * The prisoner was then stripped and fixed to the cross, nails were hammered into the wrists and feet * Prisoner was allowed drugged wine, a kind of anaesthetic to the pain. * On the cross was a notice telling of why the prisoner was on the cross. * Death was usually by suffocation rather than anything else, e.g. bleeding * Death usually took a few days, but even this was sped up when the centurion put a sword into Jesus' side. ...read more.