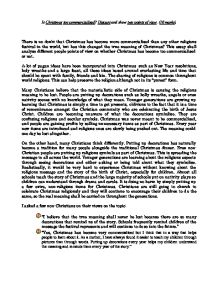 Is Christmas too commercialised?

Is Christmas too commercialised? Discuss and show two points of view. (10 marks) There is no doubt that Christmas has become more commercialised than any other religious festival in the world, but has this changed the true meaning of Christmas? This essay shall analyse different people points of view on whether Christmas has become too commercialised or not. A lot of pagan ideas have been incorporated into Christmas such as New Year resolutions, holy wreaths and a large feast, all these ideas based around everlasting life and time that should be spent with family, friends and kin. The sharing of religions is common throughout world religions. This can help preserve the religion although not in its "purest" form. Many Christians believe that the materialistic side of Christmas is causing the religious meaning to be lost. People are putting up decorations such as holly wreaths, angels or even nativity scenes with no knowledge of what they mean. ...read more.

Almost all schools teach the story of Christmas and the large majority of schools put on nativity plays so children can understand through drama and carols. It is doing no harm by simply putting up a few extra, non-religious items for Christmas. Christians are still going to church to celebrate Christmas religiously and they will continue to encourage their children to do the same, so the real meaning shall be carried on throughout the generations. I asked a few non-Christians on their views on the topic: * "I believe that the true meaning shall never be lost because there are so many decorations that remind us of the story. Schools frequently remind children of the message the festival represents and will continue to do so into the future." * "Yes, Christmas has become very commercialised but I think that in a way that helps people to learn about it. As a mother, I have always found it easier to teach my children through pictures than through words. ...read more.

eggs symbolise rebirth).However the true meaning could easily be lost unless this excessive consumption / spending is balanced by the knowledge of the religious significance. We also need to take into account the economic wellbeing of the country. By selling all these commercial goods, i.e. food, presents and decorations, it helps to support our countries financial system. In some cases, stores earn up to 50% of their annual profit during the Christmas season. To conclude, I believe that the meaning shall never be lost as there are so many reminders throughout the Christmas holiday. Also despite the fact that I am not Christian, I've been well educated on the story and message in school via carols, nativity plays and RS lessons. Many Christians still celebrate Christmas in a religious way, i.e. by going to church, and are passing on this routine to their children. Decorations are simply changing the way the festival is celebrated, and enhance the experience for the community, especially children. As long as religious symbols and decorations continue as part of festival then the message of Christmas shall live on for generations to come. By Rachel Frith 10DWS ...read more.