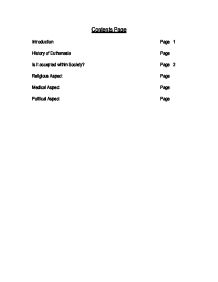 Is Euthanasia accepted within Society?

Contents Page Introduction Page 1 History of Euthanasia Page Is it accepted within Society? Page 2 Religious Aspect Page Medical Aspect Page Political Aspect Page Introduction Many times the issue concerning mercy killing is brought up within the Christian church. This is often a hard topic to be decisive on. This act of mercy killing is often referred to as Euthanasia. Throughout my project I have brought arguments for and against Euthanasia. Also I have inputted some of my own personal opinions. In addition to that I have personal opinions from other people. Furthermore anecdotal evidence has been given within this project. Several points have been made concerning this issue and all have been based from a Christian perspective. There are several bible texts to justify my point or opinion. As the debate about euthanasia appears all the time, even when it is not publicised, I took the decided to write my contemporary issue project on 'euthanasia'. As an issue euthanasia insists not to die. The term Euthanasia, is defined by the Oxford English Dictionary - bringing about of this, especially in the case of incurable and painful disease, comes from the Greek word 'euthanatos' meaning - 'a gentle and easy death'. Initially euthanasia was called 'mercy killing' which means the act of purposely making or helping someone die, instead of allowing the person to die naturally. There are different names given to different methods of euthanasia. Euthanasia can be 'passive', 'voluntary' or positive'. Passive euthanasia is where nothing is done to prevent death, allowing the person to die, which could have been delayed. Voluntary euthanasia is where a request is asked either by the patient of the legal representative. Positive euthanasia involves taking deliberate action to cause a person's death. There is debate as to whether there is really any difference between positive and passive euthanasia. When there is a removal of life-supports, or passive euthanasia, is to be seen as a contrast from active euthanasia, which is defined as "doing something to terminate life." ...read more.

It is at this point that sanctity of life doctrine clashes with "quality of life" experiences. Arguments claiming theological merit in suffering may encourage some to choose not to accept euthanasia, but the theology of one group cannot be sanctioned as acceptable for all. Majority of religions object against the act of Euthanasia, Christianity is one in many that disapproves it according to the belief human beings have a special place in God's heart, eyes and in his creation. "For you created my inmost being; you knit me together in my mother's womb" Psalm 139:13 Christianity does offer an alternative to euthanasia, which is the 'Hospice movement'. The good-hearted care hospice offers to give to the patients' tender loving care. The three aims of hospices are: * To relieve pain. * To enable patients and families to face up to death. * To care for emotional needs of the relatives. A hospice offers care to the patients and their families at the most difficult stages in their lives. The hospice helps issue such as emotional pressure, physical issues, psychological concerns, and their spiritual lives. This help is given to the family of the terminally ill person and the person who is also ill. The hospice helps the family and friends accept the fact that their loved one has a disease that cannot be overcome. Furthermore the fact that the life of the patient will probably end within a short period of time, however the hospice provides a care for the patient and supportive care for the family. Within the hospice there is no attempt made to prolong life and no medications are provided to fight the disease. 'Pain control and patient comfort are primary'. Hospices are in operation through a 24-hour period seven days a week. Although not all the hospices have the same quality of care and it may vary, but nevertheless the outcome is 'the enhancement of the significance of the life of the terminally ill elder and the easing of stress among care-givers' that also helps the dying patient. ...read more.

With regard to active euthanasia, in the Netherlands, long known for one of the most liberal euthanasia policies. . It has resulted in a greater emphasis on the patients responsibility, when the patients themselves carry out the final act, often by taking an overdose of drugs that have been prescribed by a doctor, in what is termed "medically assisted suicide". 'This is aimed at relieving in part the emotional stress and moral burden experienced by doctors who assist in such cases.' In conclusion, for those who work in the medical profession, they should neglect no means of making all their skill available to the sick and dying. But they should also remember how much more essential it is to assist them with the comfort of unlimited compassion and heartfelt charity. Such service to people is also service to Christ the Lord, who said: "As you did it to one of the least of these my brethren, you did it to me" (Mt. 25:40). Conclusion What concerns us in this issue is the freedom and empowering of an individual, most commonly the terminally ill patients, so that, in accordance with their beliefs, their values, their associations, and their commitments, they may feel free to choose the way they will die. Their choice must be an revised ad thought over thoroughly which rests on the physician sharing all aspects of the development of their illness or disease, the presentation of all alternative approaches to the termination of life, and the patients' right to choose the way in which they will die. It is quite clear as life goes on the world will accumulate more terminally ill patients and the issue of euthanasia will become more of a concern. My suggestion and conclusion is that allow God, to take over the situation. If a certain person doesn't believe in God then, try to fight the disease with whatever God they worship or follow. Euthanasia shouldn't be accepted in my opinion and I see it as a easy way out of life. ...read more.