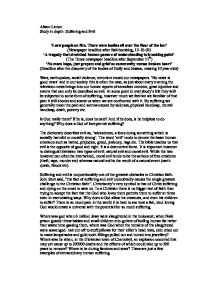 Is God really there? If he is, does he care? And if he does, is he helpless to do anything? Why does a God of love permit suffering?

Alison Linton Study in depth- Suffering and Evil 'I saw people on fire. There were bodies all over the floor of the bar' (Newspaper headline after Bali bombing, 12-10-02) 'A tragedy that stretched human powers of understanding to breaking point' (The Times newspaper headline after September 11th) 'No more hope, just prayers and grief as community nurses broken heart' (Headline after the discovery of the bodies of Holly and Jessica, missing 10 year olds) Wars, earthquakes, racial violence, terrorism crowd our newspapers. 'No news is good news' and in our society this is often the case, as just about every evening the television news brings into our homes reports of senseless murders, great injustice and events that can only be described as evil. At some point in everybody's life they will be subjected to some form of suffering, however much we feel we are familiar of that pain it still shocks and scares us when we are confronted with it. By suffering we generally mean the pain and sorrow caused by sickness, physical handicap, mental handicap, death, poverty etc. Is God really there? If he is, does he care? And if he does, is he helpless to do anything? Why does a God of love permit suffering? The dictionary describes evil as, 'wickedness, a force doing something which is socially harmful or morally wrong'. The word 'evil' tends to denote the baser human emotions such as hatred, prejudice, greed, jealousy, rage etc. The bible teaches us that evil is the opposite of good and right. It is a destructive force. It is important however to distinguish between two types of evil: natural evil and moral evil. While the two however can often be intertwined, moral evil tends to be the actions of free creatures (theft, r**e, murder etc) ...read more.

75% of them are infants and children under 5. The suffering caused by floods, hurricanes, earthquakes etc cannot largely be blamed on other people. However it's sometimes due to the mistakes of others that natural disasters happen as natures laws are stretched to their limit. Natural disasters are often called "acts of God". Again many Christians believe that natural disasters are caused by the fall, a consequence of the disruption of the perfection of God's original creation. Natural disasters are a result of disorder in creation. However, if you take time to think of a recent natural disaster, such as the Earthquake in El Salvador (Feb 2002) a 6.6 magnitude earthquake resulted in at least 315 deaths and around 3,400 people being injured we cannot begin to believe that are loving god is responsible. Nature is often seen, as it is in the New Testament as natural in God's eyes. Hanson and Hanson would agree with the sentiments that natural suffering is inexplicable. The basic theory to be learned is that nature is not moral and humanity is, therefore, as our world is continually changing however much we strive we will never achieve a perfect world as the natural laws will always follow their own course. God neither allows or forbids evil, it is just part of the way the world is, an event which humanity must put up with if they choice to live on this planet. Although most see suffering as something which is painful and not at all enjoyable, some would believe that there is a reason for it, that it is a privilege, that if you are submitted to great suffering and overcome it you are fulfilled in the eyes of God, you are fit to become a disciple. ...read more.

So, if we choose to accept that evil does indeed exist what is it, what form does it take? The New Testament gives the impression of God being at War with evil, or more specifically, a war between the Devil and God. This dualist view that is taken by many people and by religions such as the Zoroastrians of ancient Persia, in which states that the 'lord of light' is locked in perpetual combat with the 'lord of darkness' Other religions such as Christianity, Judaism and Islam remain monistic, in that they are of the opinion that the devil is one of God's creatures, as the Lord created all. There is a very stereotypical view of the devil, which stems from medieval time. This paints the devil as being a humorous creature with read face; horns and pitchfork but the bible would present it very differently. He is referred to often as Satan, the Hebrew word for enemy. Some would say that one of the synopsis of our sin is our desire to 'be as God; and wanting all the answers. When looking at the situation with suffering and evil I feel it would be a some what naive and narrow minded view to take that, because of the great suffering endured by so many people that there cannot be a god. As this existence of God is unlikely to be proved and is purely based o n faith it would be wrong to strike of any of the points discussed in this essay as invalid to the situation, all or none may be of relevance. "And God will wipe away every tear from their eyes; there shall be no more death, nor sorrow, nor crying; and there shall be no more pain, for the former things have passed away" Revelations 21 ...read more.