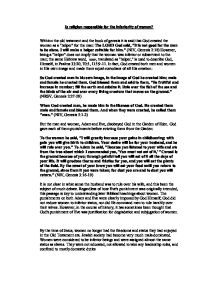 Is religion responsible for the inferiority of women

Is religion responsible for the inferiority of women? Withinn the old testament and the book of genesis it is said that God created the woman as a "helper" for the man: The LORD God said, "It is not good for the man to be alone. I will make a helper suitable for him." (NIV, Genesis 2:18) However, being a "helper" does not imply that the woman was inferior or subservient to the man; the same Hebrew word, `ezer, translated as "helper," is used to describe God, Himself, in Psalms 33:20, 70:5, 115:9-11. In fact, God created both men and women in His own image and made them equal custodians of all His creation: So God created man in his own image, in the image of God he created him; male and female he created them. God blessed them and said to them, "Be fruitful and increase in number; fill the earth and subdue it. Rule over the fish of the sea and the birds of the air and over every living creature that moves on the ground." (NRSV, Genesis 2:27-28) When God created man, he made him in the likeness of God. ...read more.

They were not educated, not allowed to take any leadership roles, and confined to mostly domestic duties Guru Nanak and other Sikh Gurus in their life advocated equality and dignity to women and took steps to implement these principles. Guru Nanak denounced the idea that spirituality was only for men, and not for women. The first Sikh Guru in his preaching and writings made direct statements emphasizing that women were no less than men: "After the death of one's wife, one seeks another, and through her social bonds are cemented. Why should we condemn women who give birth to leaders and rulers? Everyone is born of a woman and a woman alone. Nobody is born otherwise. God alone is an exception to this rule." Guru Amardas strongly opposed the custom of Sati in the sixteenth century and also advocated widow marriages. Sati was the Indian practice whereby widows burned themselves with their husband's Corpse at cremation. Guru Amar Das appointed and ordained a large number of women preachers, and at least one bishop - Mathura Devi, four hundred years ago. The Sikh Gurus also raised their voice against the Purdah or veil. ...read more.

Conclusion God created both men and women in His own image and made them equal custodians of all His creation. But, because of their disobedience, God punished Adam and Eve and evicted them from the Garden of Eden. Eve's punishment was to suffer pain in childbirth and be ruled over by her husband. Jesus broke with tradition and treated women in a much more egalitarian way than was normal in the society of that time. The early Christian churches followed Jesus' lead and gave women much higher status and more privileges than was common in the rest of the world. But Paul and other Christian leaders continued to affirm the principle of a husband's family leadership and authority over his wife. Christians disagree over whether this principle should apply in the modern world. Is the man's authority over his wife and family a great spiritual principle decreed by God for all time, or is it just a reflection of the realities of Biblical-era culture? Today, many Christians believe women should enjoy all the same rights and privileges as men. Other Christians, however, continue to advocate a secondary role for women based on Genesis 3:16 and other Bible passages. ...read more.