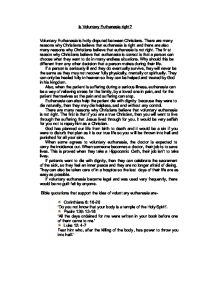 Is Voluntary Euthanasia right? Voluntary Euthanasia is hotly disputed between Christians. There are many reasons why Christians believe that euthanasia is right and there are also many reasons why Christians believe that euthanasia is not right. The first reason why Christians believe that euthanasia is correct is that a person can choose what they want to do in many endless situations. Why should this be different from any other decision that a person makes during their life. If a person is seriously ill and they do eventually survive, they will never be the same as they may not recover fully physically, mentally or spiritually. They can only be healed fully in heaven so they can be helped and treated by God in his kingdom. Also, when the patient is suffering during a serious illness, euthanasia can be a way of relieving stress for the family, by a loved one in pain, and for the patient themselves so the pain and suffering can stop. Euthanasia can also help the patient die with dignity because they were to die naturally, then they may die helpless, sad and without any control. ...read more.

If voluntary euthanasia became legal and was used very frequently, there would be no guilt felt by anyone. Bible quotations that support the idea of voluntary euthanasia are- * Corinthians 6: 18-20 'Do you not know that your body is a temple of the Holy Spirit'. * Psalm 139: 13-16 'All the days ordained for me were written in your book before one of them came to me.' * Luke 12: 4-7 Fear him who, after the killing of the body, has power to throw you into h**l.' Some real life stories of voluntary euthanasia are: Karen Ann Quinlan collapsed on April 15th, 1975. She was twenty-one years old. Within hours, she entered a coma from which she could never recover. Her parents, staunch Roman Catholics, knew their daughter would not want to be kept alive by extraordinary means. A year later, as Karen lay in a "persistent vegetative state," the courts finally allowed her treatment to be stopped; but artificial feeding was continued and she was maintained as a living corpse until June 1985, when she eventually died of pneumonia. ...read more.

But Ramon Sanpedro has made his choice and his choice should also be respected. We should seek to ensure that the rights of the individual are always respected without allowing others to feel endangered or pressurised. Sue Rodriguez, a mother in her early thirties, died slowly of Lou Gehrig's disease. She lived for several years with the knowledge that her muscles would, one by one, waste away until the day came when, fully conscious, she would choke to death. She begged the Courts to reassure her that a doctor would be allowed to assist her in choosing the moment of death. They refused. She lived on in terror, helped eventually by a doctor who, in February 1994, covertly broke the law to help her die in peace. A law on assisted suicide with rigorous safeguards could have saved her the nightmare during those months before her death, given her the confidence to carry on - with the reassurance that when it got too bad she could rely on a compassionate doctor to follow her wishes at the end. Overall, I believe that voluntary euthanasia should only be allowed if the patient has gone through the courts after being anointed, because then they would really think about euthanasia after being anointed. ...read more.