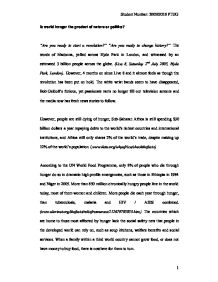 Is world hunger the product of nature or politics

Is world hunger the product of nature or politics? "Are you ready to start a revolution?" "Are you ready to change history?" The words of Madonna, yelled across Hyde Park in London, and witnessed by an estimated 3 billion people across the globe. (Live 8, Saturday 2nd July 2005, Hyde Park, London). However, 4 months on since Live 8 and it almost feels as though the revolution has been put on hold. The white wrist bands seem to have disappeared, Bob Geldolf's furious, yet passionate rants no longer fill our television screens and the media now has fresh news stories to follow. However, people are still dying of hunger, Sub-Saharan Africa is still spending $30 billion dollars a year repaying debts to the world's richest countries and international institutions, and Africa still only shares 2% of the world's trade, despite making up 12% of the world's population. (www.data.org/whyafrica/checkthefacts) According to the UN World Food Programme, only 8% of people who die through hunger do so in dramatic high profile emergencies, such as those in Ethiopia in 1984 and Niger in 2005. More than 850 million chronically hungry people live in the world today, most of them women and children. More people die each year through hunger, than tuberculosis, malaria and HIV / AIDS combined. ...read more.

The banana trade in the Caribbean being an example of this. Asda Stores being one store who have stopped buying bananas from the Caribbean, and who now buys its bananas from Del Monte Fresh Produce, the US company spun off in 1989 from Del Monte Foods. An Asda spokesman said the company swapped because of "quality and price". However, it is still possible to buy Caribbean bananas in Asda stores through its Fair Trade range, which the store proudly promotes. (news.bbc.co.uk/1/hi/business/2731859.stm) A major cause of hunger is poverty, if there is no money available to buy food then it really makes no difference how much food is available. Food is a commodity. People who don't have enough money to buy food don't count in the food equation (Robbins, R H) Disheartening, when surveys show that a third of food grown for human consumption in the UK ends up in the rubbish bin. Food industry and government statistics show that each adult wastes �420 of food a year. (news.bbc.co.uk/1/hi/talking_point/4446277.stm) The ongoing role of the Third World countries is to be the supplier of cheap and plentiful raw materials and agricultural products to the developed world. Nature's wealth was, and is, being controlled to fulfil the needs of the world's affluent people. The U.S. is one of the prime beneficiaries of this well established system. ...read more.

(www.un.org/Overview/rights.html) Figures and facts quoted within this essay show the enormity of the problem. It also gives a better understanding as to why these problems continue, and how hunger can not be seen as a product of nature. The political causes of hunger and poverty requires political solutions. We can no longer watch as a child continues to die every 3 seconds simply because they do not have enough to eat. Reference www.alertnet.org/thefacts/reliefresources/112679705053.htm www.data.org/whyafrica/checkthefacts www.data.org/whyafrica/crisisfacts www.globalwitness.org/campaigns/oil www.jubilee2000uk.org Madeley John, Big Business Poor Peoples: The Impact of Trans National Corporations on the World's Poor, Zed Books, 1999, pg 64 - 66) Mitchell, Susanna, Inequality and Poverty - A Spiral of Despair, Jubilee Research, Mittal Anuradha, True Cause of World Hunger, February 2002 www.news.bbc.co.uk/1/hi/business/2731859.stm news.bbc.co.uk/1/hi/talking_point/4446277.stm Robbins, Richard H, Readings on Poverty Hunger and Economic Development Smith, JW, The World's Wasted Wealth, The political economy of waste, New World's Press, 1989, Pg 44, 45 Smith, J W, The Worlds Wasted Wealth 2, Institute for Economic Democracy, New Worlds Press, 1994, pg 134 www.unicef.org.uk United Nations Development Programmes, Human Development Report, 2002 UK based Centre for Food Policy, Thames Valley University and UK Public Health Association, "Why Health is the Key for the Future of Farming and Food, 24 January 2002" www.un.org/Overview/rights.html ?? ?? ?? ?? Student Number: 200500218 PTUG 1 ...read more.