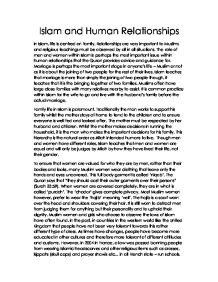 Islam and Human Relationships In Islam, life is centred on family. Relationships are very important to Muslims and religious teachings must be observed by all in all situations. The role of men and women within Islam is perhaps the most important issue within human relationships that the Quran provides advice and guidance for. Marriage is perhaps the most important stage in anyone's life - Muslim or not as it is about the joining of two people for the rest of their lives. Islam teaches that marriage is more than simply the joining of two people though, it teaches that it is the bringing together of two families. Muslims often have large close families with many relatives nearby to assist. It is common practice within Islam for the wife to go and live with the husband's family before the actual marriage. Family life in Islam is paramount. Traditionally the man works to support his family whilst the mother stays at home to tend to the children and to ensure everyone is well fed and looked after. The mother must be respected by her husband and children. Whilst the mother makes decisions in running the household, it is the man who makes the important decisions for his family. This hierarchy is the natural order as Allah intended humans to live. ...read more.

The old are treated with respect and their life experience is regarded as a valuable asset to the whole family as there is much to be learnt from the elders of the family. It is quite often that when living with their extended family, the elderly find that they have a new role in life to play in that they help out with the young children and listen to them when the parents are working or ties up with the running of a household and seeing to everyone's needs. Care and concern within the family is often seen as reflection of Allah's compassion and a way of showing gratitude for his eternal love for us all. Marriage is a very important part of life, it is the bonding of two lovers and also the bringing together of two families. It is the starting point of a long, happy and prosperous life together for the majority of people. Within the Islamic community, marriages can often be arranged however, this only takes place with the consent of both the bride and the groom; no one is forced into doing anything that they do not wish to do. If two people were forced to marry one another, the marriage would be invalid. All Muslims are expected to marry in life. ...read more.

By being married, the couple are responsible for meeting each other's sexual needs. Islam forbids men from being in the alone company of another woman which he is not married to as he may be tempted by her. The Hadith preaches, "Let no man be in privacy with a woman who he is not married to, or Satan will be the third". Islam also teaches, like most other religions, that adultery by the husband or the wife is a serious crime, this is described in Surah 17:32. Muslims believe that the conception of a child is never a mistake or an accident but a gift of life from Allah, "He bestows children, male or female according to His Will" is what the Quran tells us in Surah 42:50. Due to this, contraception is not welcomed in Islamic life. However, at the 1071 conference on Islamic family planning, it was agreed that safe and legal contraception was permitted if there was a threat to the mothers health, if there was a chance of the child having mental or physical deformities, if the family didn't have enough money to raise a child or if the use of contraception would help women who have already had children. On the whole though, Muslims would prefer to have intercourse at the time of the month when the woman is least fertile. Islam also disapproves of permanent sterilisation or vasectomy. ?? ?? ?? ?? ...read more.