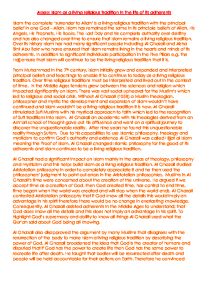 Islam as a living religious tradition

Al Ghazali broadened the idea that God is the creator of humans and disputed that if God has the power to create life then God has the same power to recreate life after death. He taught that bodies will be resurrected after death and people will be held accountable for their actions on Earth. Therefore he convinced Middle Age Muslims that they need to be aware of their actions and continue to live the way Allah did, consequently their actions makes Islam a living religious tradition. At a time when Muslims were forgetting their ideals, Al Ghazali came about reinforcing these ideals making Islam the living religious tradition it is today. Highlighting the main beliefs of Islam as well as criticising these philosophies, Al Ghazali's main contribution to Islamic theology was showing the relationship between God's power and human acts. He supported the idea of occasionalism however argued that there are two powers in human acts; gods' power and human power. Al Ghazali saw both human and acts are creations of God, though how well humans perform God's actions is reflected in human will. This highlights the supremacy of God by showing that humans are responsible for their own actions, consequently conveying Islam as a living religious tradition for the lives of its adherents. ...read more.