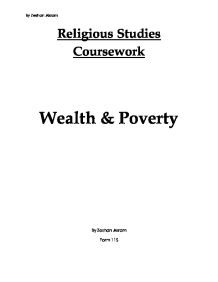 Religious Studies Coursework Wealth & Poverty By Zeshan Akram Form 11S Introduction Wealth and poverty is a very important topic in Islam. It could be the difference, for many people, between going to heaven and going to hell in the next life (Akhirah). It affects everyone in the world as money has become an essential part of surviving. Wealthy people tend to get connected with being 'powerful' whereas the poorer people get associated with being 'weak'. This is a link many people use. Allah chooses who to give wealth to and who not to give it to. Wealth is a test made by Allah for us. The richer people are judged on how they spend it and the poorer people are judged on how they do without it and whether they are patient. In this coursework I will try and outline the Muslim teachings on wealth and poverty, explain the need for world development and look in to a Muslim charity organisation. Muslim Teachings on Wealth and Poverty What is poverty is Islam? Poverty is the lack of those things that decide the quality of life, including food, clothing, shelter and safe drinking water, but also such the opportunity to learn, to work and to enjoy the respect of others. Many people will see this as a punishment but in Islam, we believe that it is a test from Allah. If we are patient we pass our test and we get heavily rewarded by Allah. If we get angry and start blaming everyone then we get sinned and it shows to us that our belief is not strong. Poverty can be caused by moral evil or natural evil. Moral evil is the result of any morally negative event caused a person. An example of a moral evil might be murder, or any other evil which someone can be held responsible. Natural evil is not caused by a person, it is natural. ...read more.

5 in number a) up to up to 24, one sheep or goat for each five camels b) 25-35, a one-year-old she-camel c) 36-45, a two-year-old she-camel d) 46-60, a three-year-old she-camel e) 61-75, a 4-year-old she-camel f) 76-90, 2 two-year-old she-camels g) 91-120, 2 three-year-old she-camels h) 121 or more, a two-year-old she-camel for each additional 40, or a 3- year-old she-camel for each additional 50. As you can see in the table, the zakat must only be paid if you have the minimum amount before hand. Different types of Zakat are donated on special occasions, such as, Zakat al-Fitr which is given at the end of Ramadan. There is also Zakat that is donated at the Aqiqah- the naming ceremony of a baby. Sadaqah Another form of charity is Sadaqah which is optional charity. It can be given at any time and is not compulsory, but there is a great reward for donating. Sadaqah Jariah is continuous charity, which means donating to a certain cause that will benefit the giver forever (until the end of time). This can be anything from giving money to a Mosque to merely having children. Donating to a poor family will mean that they will pray for that person until after he dies. Children that are raised in a correct manner and raised to respect their parents will pray for their parents before and after their death. Riba/Interest The Quran bans Muslims from being involved in riba - the lending of money at interest. It states that those who lend or borrow at interest will go to hell. This is because interest takes money from the poor and gives it to the rich, whereas Islam should take money from the rich and give it to the poor. This causes problems for Muslims living in the United Kingdom because: - They cannot have mortgages - They cannot buy things on hire purchase - They cannot use credit cards - They cannot have savings accounts in banks or building societies - They cannot have current accounts in banks which give interest - They cannot have loans. ...read more.

food security - School food for malnourished children - Immunisation and health check-ups - Physical & psychological care programs for traumatised victims of war Qurbani The Holy Prophet Muhammad (Allah bless him and give him peace) said: "For every hair on the sacrificial animal, a reward will be recorded for the person making the Qurbani. Islamic Relief has over 17 years of experience in applying the project. Muslims donate the cost of an animal to be sacrificed on their behalf by Islamic Relief, and the meat is then spread to the needy in poorer countries. Case Study Farhan is the youngest of eight children and lives in the Mandera district of north-eastern Kenya. His name means "happiness" in the Somali language. However, when he was just 3 years old his elderly father died at the age of 70. Farhan's mother, Baba, had no means of earning a living as she can neither read or write. The family was soon living in extreme poverty, barely able to afford one decent meal a day. There was no money for school or clothes, and Farhan, his four brothers and three sisters faced many problems. In February 2001, Farhan joined the One-to-One Orphan Sponsorship Program and Islamic Relief found Farhan a sponsor from France. Life immediately began to improve for the whole family. Farhan was able to return to school and the family could eat properly once again. Farhan is now in grade 8 at school and is doing very well in his exams. He has also memorised eighteen chapters of the Holy Quran. Three of his brothers have also returned to school. Conclusion Islamic Relief is a major organisation in world wide charity. It follows Islam by being a non profit organisation. It has helped many people with their struggle against poverty and hardship. It is a respected charity and has become one of the biggest in the world. It continues to fight against injustice and we should also help. ?? ?? ?? ?? By Zeshan Akram ...read more.