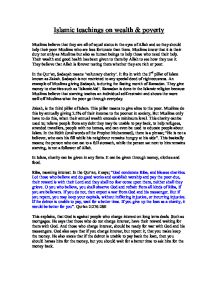 Islamic teachings on wealth & poverty Muslims believe that they are all of equal status in the eyes of Allah and so they should help their poor Muslims who are less fortunate than them. Muslims know that it is their duty not only as Muslims but also as human beings to help those who need their help. Their wealth and good health has been given to them by Allah to see how they use it. They believe that Allah is forever testing them whether they are rich or poor. In the Qur'an, Sadaqah means 'voluntary charity'. It fits in with the 3rd pillar of Islam known as Zakah. Sadaqah is not restricted to any special deed of righteousness. An example of Muslims giving Sadaqah, is during the fasting month of Ramadan. They give money to charities such as 'IslamicAid'. Ramadan is done in the Islamic religion because Muslims believe that starving teaches an individual self-restraint and shows the more well off Muslims what the poor go through everyday. ...read more.

But if you repent, you may keep your capitals, without inflicting injustice, or incurring injustice. If the debtor is unable to pay, wait for a better time. If you give up the loan as a charity, it would be better for you". Qur'an 2:276-280 This explains, that God is against people who charge interest on long term deals. Such as mortgages. He says that those who do not charge interest, have their reward waiting for them with God. And those who charge interest, should be ready for war with God and his messengers. God also says that if you charge interest, but repent it, that you make keep the money. He also states that if the debtor is unable to pay back the loan, then you should harass him for the money, but you should wait for a better time to ask him for the money back. Therefore, Muslims are forbidden to lend money and then charge interest on that money. ...read more.

The meaning; "Whoever establishes the prayers on the night of Qadr out of sincere faith and hoping to attain Allah's rewards (not to show off) then all his past sins will be forgiven." Hadith, Bukhari Vol 1, Book 2:34. The Shariah law, is known as the straight path, the proper path. Islam teaches that wealth is a gift from God to make life better. Muslims have a duty to make the money that is needed to provide a decent standard of living for their families, but they must make it honestly, and make it fairly, having nothing to do with interest, gambling, or alcohol. Wealth is something given by Allah and it is there to be shared with other Muslims. When you are rich Allah tests you to see how you use your wealth. Wealth can be taken away from you just as easily it can be given to you if you don't remember Allah. Use the wealth you are given in a good way and Allah will give you more. ...read more.