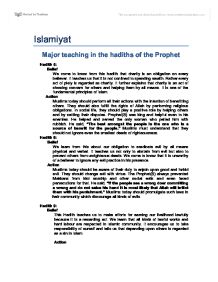 Islamiyat Notes. Major teaching in the hadiths of the Prophet

Islamiyat Major teaching in the hadiths of the Prophet Hadith 5: Belief We come to know from this hadith that charity is an obligation on every believer. It teaches us that it is not confined to spending wealth. Rather every act of piety is regarded as charity. It further explains that charity is an act of showing concern for others and helping them by all means. It is one of the fundamental principles of Islam. Action Muslims today should perform all their actions with the intention of benefitting others. They should also fulfill the rights of Allah by performing religious obligations. In social life, they should play a positive role by helping others and by settling their disputes. Prophet(S) was king and helpful even to his enemies. He helped and served the only woman who pelted him with rubbish. He said, "The best amongst the people is the one who is a source of benefit for the people." Muslims must understand that they should not ignore even the smallest deeds of righteousness. Hadith 6: Belief We learn from this about our obligation to eradicate evil by all means physical and verbal. It teaches us not only to abstain from evil but also to prevent others from unrighteous deeds. We come to know that it is unworthy of a believer to ignore any evil practice in his presence. Action Muslims today should be aware of their duty to enjoin upon good and forbid evil. They should change evil with virtue. The Prophet(S) always prevented Makkans from idol worship and other social evils and even faced persecutions for that. He said, "If the people see a wrong doer committing a wrong and do not seize his hand it is most likely that Allah will inflict them with his punishment." 1. 2. Muslims today should promulgate such laws in their community which discourage all kinds of evils. ...read more.

(10) Apostate Tribes Refusal to Pay Zakat Apostasy Tribes Details of the false prophets Aswad Ansi Tulayha Musailma Sajjah P(1) Intro P(2) Refusal to Pay Zakat P(3) Apostasy Movement P(4) 1st Three False Prophet's P(5) Musailma Hazrat Abu Bakr was confronted with many problems when he assumed the office of Khalifa in 11 AH / 632AD for example people refused to pay Zakat and the apostasy movement i.e. the curse of the abandonment of Islam followed by the appearance of false prophets. Hazrat Abu Bakr, showed extraordinary firmness, determination and courage in fighting and defeating them all. At that time many tribes such as Banu Asad, Banu Ghatafan, Banu Abbas, Banu Murrah and others surrounded Madinah. These tribes sent a deputation to Hazrat Abu Bakr. They said that they would remain on friendly terms with the authorities at Madinah provided they were relieved of the obligation to pay Zakat. Hazrat Abu Bakr said, "If with reference to Zakat, you withhold even as much as a string to ties a camel, as the Khalifa of the Holy Prophet(S), it will be my duty to fight for it, whatever the consequences." When Hazrat Abu Bakr rejected the demand of the tribes they decided to launch an attack on Madinah. Abu Bakr defeated them all. After this battle many tribes sent their delegates to Madinah, offered allegiance and paid Zakat. The short Khilafat of Abu Bakr was mostly occupies with the so-called Ridda (Apostasy) Wars. After the death of the Prophet(S) some people rebelled against the authorities at Madinah and renounced or apostasized Islam. Abu Bakr faced the situation calmly. Without any delay, he launched a campaign against the movement. He collected the troops at Madinah and divided them into eleven battalions. He instructed the commanders, first to invite the revolting tribes to Islam. But if they failed to comply, they were to be attacked. Some of the tribes submitted to Islam without fighting, while others remained adamant. ...read more.

The 'Satar' (those parts of the body which should be kept covered) must be properly covered. For a male, the Satar consists of the portion of the body from the navel to the knees. For a female, her entire body with the exception of her face, hands and feet in Satar. It must be the time for the particular prayer to be offered. The Qiblah must be faced while saying the prayers. The Quran says, "Turn then your face in the direction of the Sacred Mosque wherever you are, turn your faces in that direction" (Ch 2 : V 143) Intention or niyat must be declared for saying the kind of prayer i.e. Farz, Sunnat etc. of particular prayer time i.e. Fajr, Zuhr etc. that one is offering. Describe how a Muslim fasts during a day in Ramadan. (10) Fasting is one of the five pillars on which the structure rests. Fasting was made obligatory in 2 A.H. Fasting is observed during the month of Ramadan which is the 9th month of the Islamic Calendar. Fasting is observed from the first light in dawn till sunset. A Muslim who is fasting has breakfast or sehri before dawn. Then the intention for the fast is made in the following words: "I intend to keep tomorrow's fast of Ramadan." Now the person is subject to all restrictions and prohibitions associated with a fast till the setting of the sun. Eating, drinking, smoking, taking of medicine by mouth and marital relations are forbidden during the fast. This abstinence is known as 'Imsak'. Muslims are required to be particularly righteous and abstain from all immoral and unlawful activites. The Muslims then breaks his fast at sunset, often with a date and water and then pray following the Prophet(S)'s example. They also state the formal intention before breaking their fast in these words, "O Allah! I fasted for you and I believe in you and I put my trust in you with the sustenance you have given me I now break my fast." The Muslims follow this with a meal often eaten with friends and family members. ...read more.