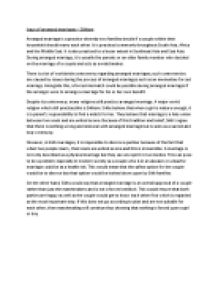 ﻿Issue of arranged marriages ? Sikhism Arranged marriage is a practice whereby two families decide if a couple within their household should marry each other. It is practiced commonly throughout South Asia, Africa and the Middle East. It is also practiced to a lesser extent in Southeast Asia and East Asia. During arranged marriage, it is usually the parents or an older family member who decided on the marriage of a couple and acts as a matchmaker. ...read more.

A major world religion which still practisesthis is Sikhism. Sikhs believe that when a girl is mature enough, it is a parent?s responsibility to find a match for her. They believe that marriage is a holy union between two souls and are united as one. Because of this tradition and belief, Sikh?s agree that there is nothing wrong and immoral with arranged marriage but is seen as a sacred and holy ceremony. However, in Sikh marriages, it is impossible to divorce a partner because of the fact that when two people marry, their souls are united as one and this is irreversible. ...read more.

This would mean that the safest option for the couple would be to divorce but that option would be looked down upon by Sikh families. On the other hand, Sikhs would say that arranged marriage is an overall approval of a couple rather than just the matchmakers and is not a forced wedlock. This would ensure that both parties are happy as well as the couple would get to know each other first which is regarded as the most important step. If this does not go according to plan and are not suitable for each other, then matchmaking will continue thus showing that nothing is forced upon a girl or boy. ...read more.