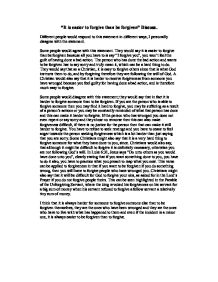 &quot;It is easier to forgive than be forgiven&quot; Discuss.

"It is easier to forgive than be forgiven" Discuss. Different people would respond to this statement in different ways, I personally disagree with the statement. Some people would agree with this statement. They would say it is easier to forgive than be forgiven because all you have to is say "I forgive you", you won't feel the guilt of having done a bad action. The person who has done the bad action and wants to be forgiven has to say sorry and truly mean it, which can be a hard thing to do. They would say that as a Christian, it is easy to forgive others since that is what God instructs them to do, and by forgiving therefore they are following the will of God. ...read more.

If the person who has wronged you does not even repent or say sorry and they show no remorse then this can also make forgiveness difficult, if there is no justice for the person then that can make it still harder to forgive. You have to refuse to seek revenge and you have to cease to feel anger towards the person seeking forgiveness which is a lot harder than just saying that you are sorry. Some Christians might also say that it is a very hard thing to forgive someone for what they have done to you, since. Christians would also say, that although it might be difficult to forgive it is definitely necessary, otherwise you are not following God's will. ...read more.

Christians might also say that it will be difficult for God to forgive your sins, as asked for in the Lord's Prayer if you do not forgive people theirs. This can be seen highlighted in the Parable of the Unforgiving Servant, where the king revoked his forgiveness on his servant for a big sum of money when his servant refused to forgive a fellow servant a relatively tiny sum of money. I think that it is always harder for someone to forgive someone else than to be forgiven themselves, they are the ones who have been wronged and they are the ones who have to live with what has happened to them and even if the incident is a minor one, it is always easier to be forgiven than to forgive. ...read more.