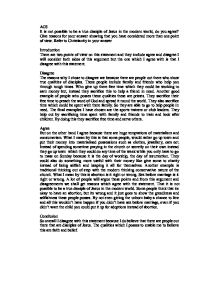 It is not possible to be a true disciple of Jesus in the modern world, do you agree?

AO3 It is not possible to be a true disciple of Jesus in the modern world, do you agree? Give reasons for your answer showing that you have considered more than one point of view. Refer to Christianity in your answer Introduction There are two points of view on this statement and they include agree and disagree I will consider both sides of this argument but the one which I agree with is that I disagree with this statement. Disagree The reasons why I chose to disagree are because there are people out there who show true qualities of disciples. These people include family and friends who help you through tough times. ...read more.

The final examples I have chosen are the sports trainers or club leaders. They help out by sacrificing time spent with family and friends to train and look after children. By doing this they sacrifice free time and serve others. Agree But on the other hand I agree because there are huge temptations of materialism and consumerism. What I mean by this is that some people, would rather go up town and put their money into materialised possessions such as clothes, jewellery, cars ect. Instead of spending sometime praying in the church or secretly on their own instead they go up town which they could do any time of the week while you only have to go to mass on Sunday because it is the day of worship, the day of resurrection. ...read more.

That it is not possible to be a true disciple of Jesus in the modern world. Some people think that its okay to have an abortion, but its wrong and it just goes to show the greediness and selfishness these people posses. By not even giving the unborn baby a chance to live and all this wouldn't have happen if you didn't have sex before marriage, even if you didn't want the child you could put it up for adoptions instead of abortion. Conclusion So overall I disagree with this statement because I do believe that there are people out there that are disciples of Jesus. The qualities which I posses to enable me to believe this are faith and belief. ...read more.