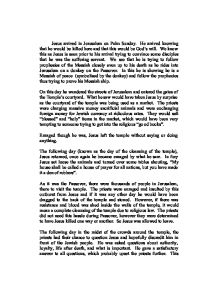 Jesus arrived in Jerusalem on Palm Sunday. He arrived knowing that he would be killed here and that this would be God's will. We know this as Jesus is seen prior to his arrival trying to convince some disciples that he was the suffering servant. We see that he is trying to follow prophesies of the Messiah closely even up to his death as he rides into Jerusalem on a donkey on the Passover. In this he is showing he is a Messiah of peace (symbolised by the donkey) and follow the prophecies thus trying to prove his Messiah ship. On this day he wandered the streets of Jerusalem and entered the gates of the Temple's courtyard. What he saw would have taken Jesus by surprise as the courtyard of the temple was being used as a market. The priests were charging massive money sacrificial animals and were exchanging foreign money for Jewish currency at ridiculous rates. They would sell "blessed" and "holy" items in the market, which would have been very tempting to someone trying to get into the religious "good books". Enraged though he was, Jesus left the temple without saying or doing anything. The following day (known as the day of the cleansing of the temple), Jesus returned, once again he became enraged by what he saw. In fury Jesus set loose the animals and turned over some tables shouting, "My house shall be called a house of prayer for all nations, but you have made it a den of robbers". As it was the Passover, there were thousands of people in Jerusalem, there to visit the temple. The priests were enraged and insulted by this outburst from Jesus and if it was any other day he would have been dragged to the back of the temple and stoned. However, if there was resistance and blood was shed inside the walls of the temple, it would mean a complete cleansing of the temple due to religious law. ...read more.

They do not accept and so, devastated and lost, Judas commits suicide. The 30 coins were not put back into the temple but instead used to buy land; this land would be used to bury strangers and because of its story would be known as the field of blood. Pontius Pilate was described as being "cruel, and his hard heart knew no compassion" and was called back to Rome because of his extreme cruelty! However, during the trial, Pilate changes. At the beginning of the trial, held in the Governors Palace (as Jews wouldn't enter a gentiles home before Passover as it would defile them), Pilate asked Jesus "Are you the King of the Jews?" If Jesus admitted so, then he would have been charged with Treason for threatening Caesar's leadership over the Jews. Jesus said in reply "you have said it so". Once again in the holy week, Jesus fulfilled the prophecies of the Messiah as the prophecy was "He was oppressed, and he was afflicted, yet he opened not his mouth; like a lamb that is led to the slaughter... so he opened not his mouth." And even though Pilate gave him the chance to defend himself, Jesus knew that all that would happen would be in God's will. It is now we see a change in Pilate; He tries to release Jesus. One reason may be because he saw how eager the priests were to have Jesus killed and got a gut feeling that he was innocent. Another reason for this (although we have no proof) is that Pilate got a message from his wife who had had a dream about Jesus and told him that he was innocent and by all means not to get Jesus' blood on his hands! Another reason may be when the scribes (who wrote the Christian Bible) wrote this, they whitewashed the story and tried to give the impression Jesus was innocent as even Pilate the Judge (who is usually so harsh) ...read more.

After more hours of being on the cross he is dehydrated and hungry. He says "I thirst". In despair, he shouts "My God, my God, why hast thou forsaken me?" ("Eloi, Lama Sabachthani?") He is probably thinking about Judas' betrayal, Peter's denial and all his disciples abandoning him. He probably thinks of how his life was a waste. Close to death, Jesus says to himself and the crowds "It is accomplished". He realises he is about to die and thinks of the prophecy of the Old Testament, he has now fulfilled it. He speaks a prayer to God: "Father, into thy hands I commit my spirit". He is showing no resistance to his fate. Over the 6th hour (12 o'clock) the sky is said to have gone dark. This may have been due to an eclipse or sand storm etc., but it is more likely to be symbolic writing to express the great crime that is being committed and dark used as a symbol for evil (against light - good). Just before his death he is heard to have said Eli - or Elijah. His name can be called out in times of need. He will assist the righteous ones. The soldiers, once more mocking him, offer him some rough wine (drunk by soldiers) and said, "let's see if Elijah will save him". Moments later, Jesus let out a wail and died. It is said that at that time an earthquake tore the curtain, separating the holy place from the holy of holly's down. This probably did not happen, but is just symbolism showing the removal of the barrier between man and God. Also at Jesus' crucifixion a centurion, who would usually not be affected by death, was moved by Jesus' death and said, "Surely, he was the Son of God". This is interesting, as immediately after Jesus' death, he affected a gentile and his life and death would continue to affect people for thousands of years to come. RHYS HOWELL-MORGAN ?? ?? ?? ?? ...read more.