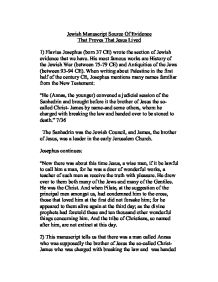 Jewish Manuscript Source Of Evidence That Proves That Jesus Lived

Jewish Manuscript Source Of Evidence That Proves That Jesus Lived 1) Flavius Josephus (born 37 CE) wrote the section of Jewish evidence that we have. His most famous works are History of the Jewish War (between 75-79 CE) and Antiquities of the Jews (between 93-94 CE). When writing about Palestine in the first half of the century CE, Josephus mentions many names familiar from the New Testament: "He (Annas, the younger) convened a judicial session of the Sanhedrin and brought before it the brother of Jesus the so-called Christ- James by name-and some others, whom he charged with breaking the law and handed over to be stoned to death." ...read more.

first did not forsake him; for he appeared to them alive again at the third day; as the divine prophets had foretold these and ten thousand other wonderful things concerning him. And the tribe of Christians, so named after him, are not extinct at this day. 2) This manuscript tells us that there was a man called Annas who was supposedly the brother of Jesus the so-called Christ-James who was charged with breaking the law and was handed over to be stoned to death. It also says that James the brother of Jesus was a leader in the early Jerusalem Church. It also tells us that at about this time there was a wise man called Jesus who was supposedly the doer of wonderful works. The people called him Christ. ...read more.

3) Josephus was trying to impress the Roman Emperor Vespsian who had once been Josephus' enemy but spared his life. This means that whatever the author said could have been affected by this. I think the author is trying not to upset the Romans because he is afraid but in passage it says that Pilate was scared of a man more powerful than him so he condemned him to death. 4)It is possible that Josephus' work is historically accurate. However, we have to bear in mind that Josephus was trying to impress Vespsian who had spared him his life. Also Josephus was Jewish giving him a bond with Jesus which made his writings biased. Or he could of felt betrayed by Jesus as he was supposed to be the saviour to save the Jews. Therefore writings might possibly of been biased. ...read more.