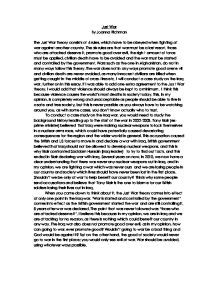 The Just War theory consists of 6 rules, which have to be obeyed when fighting at war against another country. The six rules are that war must be a last resort, those who are attacked deserve it, promote good over evil, the right amount of force must be applied, civilian death have to be avoided and the war must be started and controlled by the government. Wars such as the one in Afghanistan, do not in many ways follow this theory. The war does not in any ways promote good over evil and civilian death are never avoided, as many innocent civilians are killed when getting caught in the middle of cross-fires etc. I will conduct a case study on the Iraq war, further on in this essay. If I was able to add one extra agreement to the Just War theory, I would add that violence should always be kept to a minimum. I think this because violence causes the world’s most deaths in society today. This, in my opinion, is completely wrong and unacceptable as people should be able to live in a safe and free society, but this is never possible as you always have to be watching around you, as with some cases, you don’t know actually who to trust.

To conduct a case study on the Iraq war, you would need to study the background history leading up to the start of the war in 2002-2003. Tony Blair (ex-prime minister) believed that Iraq were making nuclear weapons to lock themselves in a nuclear arms race, which could have potentially caused devastating consequences for the region and the wider world in general. This accusation caused the British and US forces to move in and declare a war with Iraq. British government believed that Iraq should not be allowed to develop nuclear weapons, and this is why Blair confronted Saddam Hussain (Iraq leader)  to try to find out facts, and this ended in Blair declaring war with Iraq. Several years on now, in 2010, we now have a clear understanding that there was never any nuclear weapons out in Iraq, and in my opinion, we are fighting a war which was never ours and we are losing people in our country and society which lives should have never been lost in the first place. Shouldn’t we be only at war to help benefit our country? This is why some people send accusations and believe that Tony Blair is the one to blame for our British soldiers losing their lives out in Iraq.

When you come down to think about it, the Just War theory comes into effect at only one point in the Iraq war. ‘War is started and controlled by the government’ comes into effect as the British government started the war and are still controlling it, 8 years after war was declared. The point that was never followed was ‘those who are attacked deserve it’. I believe this because in my opinion, we are in Iraq and we are attacking for no reason, as there is nothing which could benefit our country in any way. The Iraq war also does not promote good over evil, as in my opinion, how can going to war, ever promote good? Wouldn’t going to war be a bad thing and God would be against it? But on the other hand, the good of society would never go to war in the first place; you would only see evil at war. War should be avoided, using whatever ways possible.