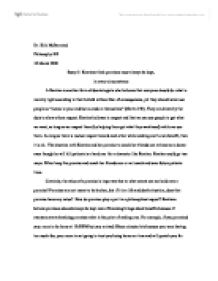 Kantians believe promises should always be kept even if breaking brings about benefits because if everyone starts breaking promises what is the point of making one.

Dr. Kirk McDermind Philosophy 100 10 March 2008 Essay 2- Kantians think promises must always be kept, in every circumstance A Kantian is another form of deontologists who believes that everyone should do what is morally right according to their beliefs without fear of consequences, yet they should never use people as "means to your end but as ends in themselves" (Martin 130). They are driven by the duty to show others respect. Kantian believes in respect and that we can use people to get what we want, as long as we respect them (by helping them get what they want/need) while we use them. As long as there is mutual respect toward each other while seeking one's own benefit, then it is ok. The situation with Kantian and her promise to coach her friends son to become a doctor even though he will kill patients is a hard one for a character like Kantian. Kantian could go two ways. Either keep the promise and coach her friends son or not coach and save future patients lives. ...read more.

Kantian's categorical imperative is telling her she has to keep her promise without questioning it. It will be morally good to keep a promise but bad to release a negligent doctor in society. Although it may benefit society Kantian could not careless because he will never break a promise even if society stands to benefit. "The reason you couldn't will that everyone should break promises when that would bring benefits is that if everyone did that, then the whole concept of promising would become meaningless"(133). Although society will stand to benefit from Kantians broken promise, she can not break her promise. Since Kantian has no "consideration of consequences" and believe they "are totally irreverent to moral thinking" (133). Breaking a promise is out of the question for Kantian even if she is teaching a boy who might accidentally murder people. Kantian is a complex character, even though he/she says that they will never break a promise, they have a loop hole in their belief that can make them. ...read more.

This will go against my belied and morals and I am not Kantian without my beliefs and morals." In the end Kantian has two ways to solve his problem and both ways will in a way go against his morals and go against his beliefs. One way Kantian could go is keep the promise and another way Kantian could go is respect himself, the future patients of the killer surgeon, his job, and break the promise. The smart choice will be to break the promise because the promise show that her friend and her friends son is using Kantian in a disrespectful way. If they respected Kantian they would know and understand his morals and they will see that the promise is disrespecting Kantian and everyone who is going to suffer from the situation if Kantian keeps the promise. So the whole promise was made by going against Kantians beliefs on respect and when Kantian sees this he will break the promise. Kantian would say " I, Kantian make promises based on Respect and if the promise I made is disrespectful in anyway to anyone then that cannot be a promise that Kantian made and definitely not a promise Kantian will keep". ?? ?? ?? ?? ...read more.