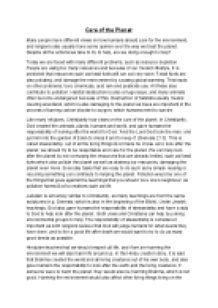 Like many religions, Christianity has views on the care of the planet.

﻿Care of the Planet Many people have different views on how humans should care for the environment, and religions also usually have some opinion over the way we treat the planet. Despite all the actions we take to try to help, are we doing enough to help? Today we are faced with many different problems, such as resource depletion. People are using too many resources and because of our modern lifestyle, it is predicted that resources such as fossil fuels will run out very soon. Fossil fuels are also polluting, and damage the environment by causing global warming. This leads on other problems, toxic chemicals, acid rain and pesticide use. All these also contribute to pollution. Habitat destruction is also a huge issue, and many animals often become endangered because of this. Destruction of habitats usually means clearing woodland, which is also damaging to the planet as trees are important in the process of turning carbon dioxide to oxygen, which humans need to survive. ...read more.

Judaism is extremely similar to Christianity, as many teachings are from the same scriptures (e.g. Genesis, which is also in the beginning of the Bible). Under Jewish teachings, God also gave humans the responsibility of stewardship and have a duty to God to help look after the planet. Both Jews and Christians can help by joining environmental groups to help. The responsibility of stewardship is considered important as both religions believe that God will judge humans for what deeds they have done, and to live a good life after death we would want to try to do as many good deeds as possible. Hinduism teaches that we should respect all life, and if we are harming the environment we will also harm life around us. In the Hindu creation story, it is said that Brahma created the world and all living creatures out of his own body, and also gave humans the responsibility to look after the earth and the living creatures. ...read more.

Anyone can easily help protect the planet by just doing a few simple tasks everyday whether it is just turning off the lights when not being used, recycling or reusing things rather than throwing them away. However, many religious teachings are extremely old, and because we have advanced so much in technological terms they often do not link to what the world is like today, such as global warming and new types of transport that did not exist when the teachings were taught. However, teachings such as loving your neighbours can still be linked back to today as the general basis behind the teaching remains the same. My view is that everyone is capable of doing their own bit to help protect the environment, and it should be done as it will help in the future. As a Christian, I believe that as we are given the responsibility to look after the planet we should all do our best to protect and care for it, and that doing something small such as recycling can still help contribute to caring for the environment. ...read more.