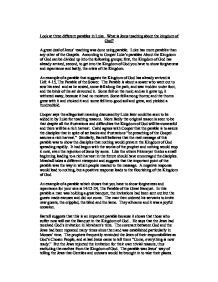 Look at three different parables in Luke. What is Jesus teaching about the kingdom of God?

Look at three different parables in Luke. What is Jesus teaching about the kingdom of God? A great deal of Jesus' teaching was done using parable. Luke has more parables than any other of the Gospels. According to Cooper Luke's parables About the Kingdom of God can be divided up into the following groups; first, the Kingdom of God has already arrived, second, to get into the Kingdom of God you have to show forgiveness and repentance and lastly, the crisis of the Kingdom. An example of a parable that suggests the Kingdom of God has already arrived is Lk8: 4-15, The Parable of the Sower. The Parable is about a sower who went out to sow his seed and as he sowed, some fell along the path, and was trodden under foot, and the birds of the air devoured it. Some fell on the rock; and as it grew up, it withered away, because it had no moisture. Some fell among thorns; and the thorns grew with it and choked it and some fell into good soil and grew, and yielded a hundredfold. Cooper says the allegorical meaning discussed by Luke later could be seen to be added in by Luke for teaching reasons. More likely the original reason is seen to be that despite all the frustrations and difficulties the Kingdom of God will be successful and there will be a rich harvest. Caird agrees with Cooper that the parable is to assure the disciples that in spite of set backs and frustrations "he preaching of the Gospel assures a rich harvest." ...read more.

E Kasemann agrees with Conzelmann that Luke foresaw a future coming and wrote accordingly as he states "You do not write the history of the church if you are expecting the end of the world to come any day." Tucket also supports Conzelmann's theory saying there are three main pieces of evidence for it. Firstly, using Mk 9.1 "and he said to them, "I tell you the truth, some who are standing here will not taste death," Luke does not say "before they see the kingdom of God come with power". Many say this gives the idea that the Kingdom is more of a spiritual reality rather than a physical place that is near at hand. Secondly, in Lk 21.8 "he replied: "Watch out that you are not deceived. For many will come in my name, claiming, 'I am he,' and, 'The time is near.' Do not follow them" Luke adds to the Markan version that false claimants will come saying they are Jesus and saying the end is near. This implies that Luke was warning people against believing those who say the end is near. Lastly, there is no mention in Acts of an imminent end to things. In fact the disciples are told it is not for them to know the times or periods set by the father's own authority (Acts 1:7). A N Wilson suggests that Luke was just trying to meet the needs of a dual opinion in society where some believed the end was near and others having doubt that it was ever going to come. ...read more.

Morris points out that Jewish women did not untie their hair in public, showing the sinner's oblivious attitude towards public opinion in the immensity of emotion. Morris also informs that to attend to feet was often regarded as a servant's task and was probably a mark of humility. The woman showed great love and gratitude towards Jesus. Simon questioned the authenticity of Jesus as a prophet and doubted Jesus was aware of who the woman was. Jesus made a contrast between the woman's and Simon's behaviour, which Morris said, was that Simon had not given Jesus the treatment due to an honourable guest but the woman had. Jesus then tells the prostitute that her sins are forgiven. It is apparent that no matter how many and how great the sins, God can forgive them. In contrast to this, he who is forgiven little loves a little. In conclusion, although Jesus recognised the Pharisees genuine keenness and anxiety to please God, and he saw that in many ways they were good, honest people, he also new they were misguided and their legalistic ways soon made them forget that the law was a benefit to humanity. Stanton concludes that regarding the Sabbath, that Jesus parted company with some of the ways many, particularly the Pharisees, interpreted the implications of the law. In these cases, the conflict revolved around different interpretations of the will of God revealed in scripture. It is also important to realise that although there was a great deal of conflict, Jesus and the religious authorities shared the same objectives and both continued to seek the renewal of Israel. Sociologists have often observed that the closer the relationships between groups, the more intense the conflict is. ...read more.