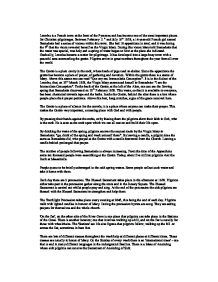 Lourdes is a French town at the front of the Pyrenees and has become one of the most important places for Christian pilgrimages.

Lourdes is a French town at the front of the Pyrenees and has become one of the most important places for Christian pilgrimages. Between February 11th and July 16th 1858, a 14-year-old French girl named Bernadette had a series of visions within this town. She had 18 apparitions in total, and it was during the 9th that the vision revealed herself as the Virgin Mary. During this vision Mary told Bernadette that the water was special, was holy and a spring of water began to flow at the place she indicated. Gradually, Lourdes became a center for pilgrimage. It has developed into a large busy town with a peaceful area surrounding the grotto. Pilgrims arrive in great numbers throughout the year from all over the world. The Grotto is a plain cavity in the rock, where herds of pigs used to shelter. Since the apparitions the grotto has become a place of prayer, of gathering and devotion. ...read more.

He is seen as the rock upon which we can all rest on and build their life upon. By drinking the water of the spring, pilgrims answer the request made by the Virgin Mary to Bernadette: "go, drink of the spring and wash yourself there". By leaving a candle, a pilgrim does the same as Bernadette did, who prayed at the Grotto with a candle borrowed from the Church. Leaving a candle behind prolonged that prayer. The number of people following Bernadette is always increasing. From the time of the Apparitions some ten thousand people were assembling at the Grotto. Today, about five million pilgrims visit the Rock at Massabielle. People queue to be briefly submerged in the cold spring waters. Some people collect such water and take it home with them. Each day there are 2 processions. The Blessed Sacrament takes place in the afternoon at 1630. ...read more.

These masses are usually in honor of Mary. On the Sunday of every week there is an 'international mass' - one that is said in many different languages in the underground Basilica. There is a Mass of Anointing where sick pilgrims can receive the Sacrament of Anointing of Sick. Mary's request for penance to Bernadette has resulted in the Sacrament of Reconciliation being carried out. Pilgrims can also do less religiously demanding tasks such as go shopping in the town for souvenirs or socializing. The majority of pilgrims attending Lourdes will be doing so as part of a large group - organized maybe by their church or diocese. This group will set aside time for recreation and entertainment. Some of this may be fun and games in a park or on any available grass allotment. It is this aspect of Lourdes that preying and religion can co-exist with fun and enjoyment in a usually unseen fashion that makes Lourdes such a special place for any Christian pilgrim. A place that can be visited and revisited time and again. ...read more.