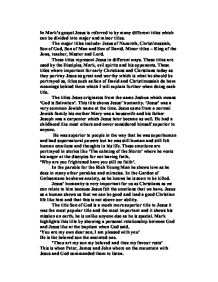 In Mark's gospel Jesus is referred to by many different titles which can be divided into major and minor titles. The major titles include- Jesus of Nazareth, Christ/messiah, Son of God, Son of Man and Son of David. Minor titles - King of the Jews, teacher, Master and Lord. These titles represent Jesus in different ways. These titles are used by the Disciples, Mark, evil spirits and his opponents. These titles where important for early Christians and Christians today as they portray Jesus as great and worthy which is what he should be portrayed as, titles such as Son of David and Christ/messiah do have meanings behind them which I will explain further when doing each title. The titles Jesus originates from the name Joshua which means 'God is Salvation'. This title shows Jesus' humanity. 'Jesus' was a very common Jewish name at the time. Jesus came from a normal Jewish family his mother Mary was a housewife and his father Joseph was a carpenter which Jesus later became as well. He had a childhood like most others and never considered himself superior to anyone. He was superior to people in the way that he was superhuman and had supernatural powers but he was still human and still felt human emotions and thoughts in his life. These emotions are portrayed in stories like 'The calming of the Storm' where he vents his anger at the disciples for not having faith, 'Why are you frightened have you still no faith'. ...read more.

of happiness and peace, he'd defend the Jews and establish a kingdom for them alone, he would establish an earthly kingdom which the Jews would rule in Palestine. Jerusalem would be the centre of the world. Jesus was a peaceful messiah who was to free the Jews from sin, the kingdom was offered to everyone who was willing to listen to the message. The kingdom he established was not earthly but everyone doing the will of God where ever they happened to be. He was humble, poor, loving and forgiving and not a rich powerful leader. In addition there can be no doubt that in the work and words of Jesus the church came quick in the certainty in faith that Jesus was the long awaited messiah of God. No one else calls Jesus the Son of Man. It is the name he calls himself. The term Son of Man can mean * An ordinary human being * In the Aramaic language which Jesus spoke it meant 'I' * But there was another meaning which meant he was someone that definitively was not ordinary. In the book of Daniel the prophet Daniel sees a vision of the Son of Man coming on the clouds of heaven which is very like what Jesus said to the high priest in using it to describe himself, he is saying that he is one who receives eternal kingship. ...read more.

The title 'Lord' was not actually used in Mark's gospel to address Jesus rather it was to mean 'Sir' or 'Master'. Jesus only received this title after his resurrection to symbolize his greatness, power and divine authority. Another title is Prophet although it was not used by many except people who may not of believed Jesus was the Messiah but a prophet. Jesus even uses this title himself saying, 'A prophet will always be held in honour except his own hometown, and among his kinsmen and family.' (6:16, 8:28) In the Old Testament a prophet is considered a very powerful man who called people back to God, to show them the path of God and to warn them if they did not obey his rules. Other even smaller titles used in Mark's Gospel were 'King of the Jews' this was only used once or twice. At one stage it was used before Pilate at Jesus' crucifixion. From the work and research I have done in this coursework I realize that Jesus had many different titles was interpreted and thought of as different by various people. I have learned a lot from this assignment not just about Jesus and his many titles but also about what this means for Christians today, it has give me a much better understanding of Jesus' life, death and resurrection. ...read more.