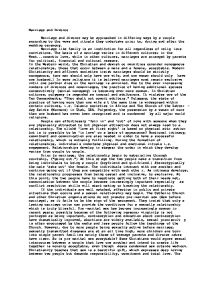 Marriage and Divorce Marriage and divorce may be approached in differing ways by a couple according to the vows and rituals they undertake prior to, during and after the wedding ceremony. Marriage like family is an institution for all regardless of religious convictions. The basis of a marriage varies in different cultures; in the West...romantic love, while in other cultures, marriages are arranged by parents for political, financial and cultural reasons. In the Western world, the Christian and Jewish communities consider monogamous relationships, those that occur between a male and a female, acceptable. Modern Christianity and affluent societies insist marriages should be strictly monogamous, (one man should only have one wife, and one woman should only have one husband.) In some religions it is believed marriages must remain exclusive until one partner dies or the marriage is annulled. Due to the ever increasing numbers of divorces and remarriages, the practice of having additional spouses consecutively (serial monogamy) is becoming ever more common. In Christian cultures, polygamy is regarded as immoral and adulterous. It violates one of the Ten Commandments, "Thou shalt not commit adultery." Polygyny, the state of practice of having more than one wife at the same time is widespread within certain cultures, i.e. Islamic societies in Africa and The Church of the Latter-day Saints (Mormons) in Utah, USA. Polyandry, the possession by a woman of more than one husband has never been recognized and is condemned by all major world religions. ...read more.

It is considered unlucky for the groom to see the bride in her wedding dress before until she arrives at the ceremony. Brides also follow the rhyme: 'Something old, something new, something borrowed, something blue'. This tradition originated in the Victorian era, although some of the customs pre-date that period. The "something old" represents the couple's friends who will hopefully stay close during the marriage. Traditionally this was old garter which given to the bride by a happily married woman in the hope that her happiness in marriage would be passed onto the new bride. "Something new" symbolises the newlyweds' happy and prosperous future. The "something borrowed" is often lent by the bride's family and is an item cherished by the family. The custom of the bride wearing "something blue" originated in ancient Israel where the bride wore a blue ribbon in her hair to represent fidelity. The rhyme continued, "And put a silver sixpence in her shoe." The Victorians did this in order to guarantee prosperity within the marriage. Today some brides put a penny in their shoe. The bride also carries a bouquet of flowers, some brides' choice of flowers are dependent on their symbolic meaning i.e. roses are symbolic for love. After the reception the bride traditionally throws her bouquet back over her shoulder where the unmarried female guests group together and try to catch it. By tradition, the one who catches the bouquet will be the next one of those present to marry. ...read more.

The Divorce Law Reform of 1996 states that an 'Irretrievable breakdown' is sufficient evidence for a civil divorce to be granted, but civil divorce is not recognised by the Catholic Church. The Catholic Church believes marriage is indissoluble and irrevocable by law, so instead marriages are annulled. Annulment is properly known as An Ecclesiastical Declaration of Nullity. Marriages can be declared void, if the sacrament was never fully consummated after the ceremony, if the involved parties can prove it. A void-able marriage occurs when there is a defect in the contractual agreement. An annulment must be based on mental illness, fraud, forced consent, physical incapacity to consummate the marriage, lack of consent to underage marriage or bigamy. Annulment means a spouse can bring an action to have the marriage declared a nullity, meaning that it never legally existed in the eyes of the Church. Children also remain legitimate from within the annulled marriage. The sanctity of marriage in today's society is becoming an ideal more than reality. The ever-increasing divorce rates signify, that divorce is no longer stigmatised but a realistic way to end a marital breakdown. Many couples no longer need to marry, as society no longer looks down upon unmarried couples and the children of unmarried unions are now viewed as acceptable. Society has evolved and developed a modern, realistic approach to marriage, cohabitation and pre marital relationships, realising that marriage is more a choice than a necessity in modern times. ...read more.