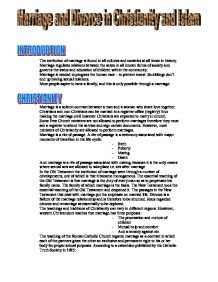 Marriage and divorce in Christianity and Islam.

The institution of marriage is found in all cultures and societies at all times in history. Marriage regulates relations between the sexes in all known forms of society and governs the status and education of children within the community. Marriage is needed to progress the human race - to prevent incest. So siblings don't end up having sexual relations. Most people aspire to have a family, and this is only possible through a marriage. Marriage is a solemn contract between a man and a woman who share love together. Christians and non-Christians can be married in a registrar office (registry) thus making the marriage civil however Christians are expected to marry in church. Some Free Church ministers are not allowed to perform marriages therefore they must ask a registrar to attend the service and sign certain documents. However, most ministers of Christianity are allowed to perform marriages. Marriage is a rite of passage. A rite of passage is a ceremony associated with major moments of transition in the life cycle: - Birth - Puberty - Mating - Death And marriage is a rite of passage associated with mating, because it is the only means where sexual acts are allowed to take place i.e. sex after marriage In the Old Testament the institution of marriage went through a number of developments, one of which is that it became monogamous. The essential teaching of the Old Testament is that marriage is the duty of every man so as to perpetuate his family name. The family of which marriage is the basis. The New Testament took the essential teaching of the Old Testament and deepened it. The passages in the New Testament that deal with marriage put the emphasis on married life. Divorce is a failure of the marriage relationship and is therefore to be shunned. Jesus regarded divorce and remarriage as essentially to be deplored. ...read more.

Islam places great emphasis on family values, as does Christianity. A Muslim family should be: - secure, healthy and secure for the family unit - the guardian of the natural sexual desires - the breeding place for human virtues and a secure refuge against inward and outward troubles. The ummah in Islam is like one big family. Muslims usually call other people their brothers or their sisters. Allah is seen as the parent. The young are nurtured for, the elderly are cared for. In Islam, divorce is disliked but permitted. It is reasonably easy for men, but not for women. Muhammad said: "With Allah the most hateful of the things made lawful is divorce." Muslim couples should be reconciled before making a final decision. Obviously, families from both sides do all they can to try and save the marriage, because it was them who arranged it! If things can't be worked out, two arbitrators are appointed. "If you fear a breach between a man and his wife, appoint two arbiters, one from his family and the other from her. If both want to be brought back together, Allah will settle things between them." But if there is no hope and the couple both want a divorce, they must wait a period of three month. This is done to make sure the wife isn't pregnant. If she is, the husband must provide for the children of the marriage. Women can get a divorce if is written into their contract. Divorce is very serious in Islam, because it can break up the family unit, which provide the framework for Islamic life. The only reason it is permitted is because Islam recognises that a marriage relationship may not work and it accepts human nature. And if one continues an unhappy marriage, one might be tempted to commit adultery, and that is forbidden in Islam. Marriage is very important in Islam. ...read more.

When the Persians invaded, many Churches were destroyed except this one because it showed three wise men wearing Persian dresses. Nazareth This was where Jesus grew up. There are to sites of interest - the Basilica of the Annunciation and the Greek Orthodox Church of St. Gabriel. Both claim to be the site of Annunciation. A tradition claims that Gabriel appeared before Mary inside the Orthodox Church. Taize This is an international place of pilgrimage. It is situated in southeast France. It was formed after WWII. It brought together young Christians from all divisions and even non-believers into an area where life is simple and the hospitality is warm and friendly. The founder reckoned that if people knew each other, then there's less chance of another war breaking out. But the main reason why people come there is to worship. Lindisfarne (Holy Island) This is just off the Northumbrian coast. A huge monastery was built here at the request of King Oswald. He wanted Christianity to flourish in his kingdom. However when Henry VIII came to power, he closed it down. So it is now in ruins but pilgrims still hold services there. Lourdes This is in the south of France and is a very popular pilgrimage site. It is claimed that Bernadette is said to have seen the Virgin Mary. Since becoming a place of pilgrimage, there have been many cases of miraculous cures. Others however say that instead of being healed physically, they were healed mentally. I have enjoyed writing this piece of work and have learned a lot. So I have come to realise that going on pilgrimage is a way to escape the hustle and bustle of the modern world. It gives you a chance to reflect on your life and your time, left on this world. Or gives you the feeling of Ummah (being part of a brotherhood) and not ever feeling isolated. The pilgrimage seems to be more popular with Islam, since it has the largest gathering of people on earth. Nevertheless, the experience for both religions is the same. ...read more.