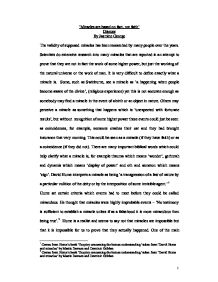 'Miracles are based on fact, not faith' - Discuss.

'Miracles are based on fact, not faith' Discuss By Jasmine George The validity of supposed miracles has been researched by many people over the years. Scientists do extensive research into many miracles that are reported in an attempt to prove that they are not in fact the work of some higher power, but just the working of the natural universe or the work of man. It is very difficult to define exactly what a miracle is. Some, such as Swinburne, see a miracle as 'a happening when people become aware of the divine', (religious experience) yet this is not accurate enough as somebody may find a miracle in the event of a birth or an object in nature. Others may perceive a miracle as something that happens which is 'unexpected with fortunate results', but without recognition of some higher power these events could just be seen as coincidences, for example, someone crashes their car and they had brought insurance that very morning. This could be seen as a miracle (if they have faith) or as a coincidence (if they did not). There are many important biblical words which could help clarify what a miracle is, for example thauma which means 'wonder', gerhurah and dynamis which means 'display of power' and oth and semeton which means 'sign'. ...read more.

One problem of the belief in the God of classical theism is that whilst some miracles are answered, there are plenty of people who have faith yet are not healed. This surely goes against the idea of an all - loving and omnipotent God as in Matthew it says 'Ask and you will receive' yet this clearly does not happen no matter how much faith you have that it will. According to Maurice Wiles a God who intervenes at Lourdes to cure a man of cancer but doesn't stop millions starving in Africa (who helps the individual but not the masses) is not worthy of worship. Although some people say that this may only include a spiritual healing or means entry into heaven, in the time Jesus was on earth he healed many a physical ailment so this shows that God is not averse to healing the physical body as well as the spiritual being. The essence of the Christian religion is faith and miracles and the two are very much integrated; without miracles there would be less faith and much of the authority of the Bible is dependent on miracles. The Christian religion believes that miracles are reliant on faith. Accepting the miracles in the Bible for example, Jesus turning the water into wine are based on faith as this happened around two thousand years ago and there is no enduring evidence. ...read more.

People who think miracles are 'an event with fortunate results' then miracles are very much based on faith because otherwise it could be seen as a coincidence. For example, a woman comes home from holiday two days early and walks into her house to find that her kitchens about to catch fire, this woman may have faith that it's a miracle or may just believe it's a very lucky coincidence. Holland suggests how easy it is for simple coincidences to be called miracles although one might argue that this would mean that it is just as easy for miracles to be called coincidences.7 Those who think a miracle has some sort of 'divine presence or intervention involved' believe that a higher power has to be present and also believe that this power will actually intervene in life on Earth. They have to have a belief in the God of theism rather than the God of Deism who is totally transcendent and above the world. There is nothing to stop anyone saying that miracles are not just unexpected events in an unprecedented future and that there is no such thing as miraculous just the unexplained, after all as Spinoza said, 'Human limitations prevent us from understanding the true character of reality. ...read more.